The sting. (The Shed cafe, Henstead)

The Shed Cafe,
Henstead,
Now Closed Down
Friday was very sunny but rather windy so I didn't fancy a long cycle slog riding into the wind. I therefore came up with a cunning plan. Our cafe cycle ride would head out East, with the wind behind, before sneakily catching the train back home avoiding any unnecessary hard work. I was again joined by Andrew (who is notoriously hard to please) who claimed he had been suffering from a virus which was why he performed so badly on our last ride (see more training less sofa) and therefore liked my plan in order to aide his recovery.

As we set off the weather conditions were difficult to judge with sun, some clouds and a cool wind. The forecast had promised temperatures in the mid twenties but it certainly felt colder. Andrew asked me for some advice on if to bring his gilet with him or not.

Cycling guest cycling top tip no 51. To avoid later recrimination never offer a fellow cyclist your opinion on the clothing layers they need for a ride as you will only get it wrong.

Knowing all about cycling guest cycling top tip 51 I refused to offer an opinion on his clothing options although I decided to go with the forecast and just wear a short sleeve top with zip open. This proved to be a big mistake but not from a temperature point of view.

I like to find cafes a bit off the beaten track and felt today's destination, the Shed cafe at Henstead hit the mark and we made good progress out there as we left Norfolk and rode into deepest Suffolk with the wind hurrying us along. Suddenly I felt something enter my cycling top via the open zip and before I had time to investigate I felt a sharp pain. I quickly came to a halt and ripped open my top to see an angery wasp fly off having giving me a sting. Andrew offered to pee on my chest but I said I thought that was for jelly fish and that it probably wont help here. Despite his disappointment I said I would attempt to continue the ride without any form of pain relief.

It took all my mental powers to shutout a small throbbing and slight itch on my chest as we continued our ride to Henstead arts and crafts centre where we found the Shed Cafe.
Inside the cafe was decorated with the sort of tools and bits you would expect to find in a good shed, including a bike dangling from the ceiling.
Despite the high quality of the indoor surroundings we decided to sit in the outside terrace as it was in the sunshine. It had the feel of a cafe in Spain or Italy and we could easily have been abroad, although to some extent we were having crossed the boarder from Norfolk into Suffolk.
I went to check out the cake selection in order to award the effective cake selection (ECS) mark. It wasn't the biggest but the inclusion of an interesting marmalade and hazelnut cake gave the ECS a boost. I obviously choose that one while Andrew went for the chocolate one.
As we lapped up the excellent atmosphere and ambience our drinks and cakes arrived. We both felt our drinks, hot chocolate and Cappuccino, were a little weak but I really liked my Marmalade and Hazelnut cake so it was a good cake taste quality (CTQ) mark. 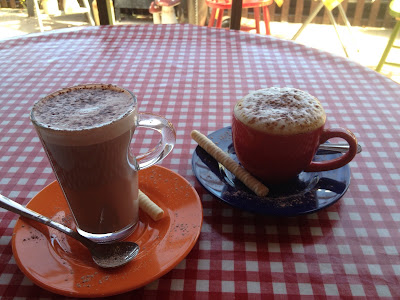 If you like your cafes away from it all, with a great atmosphere and ambience, than the Shed cafe is well worth a visit.

We set off again for the last few miles to Lowestoft station. Andrew was getting really excited as we entered the seaside town as he is a big fan of the seaside. He therefore insisted we went to look at the sea rather than go straight to the station. Which we did although I wouldn't let him buy a bucket and spade as we had a train to catch.
The combination of seeing the sea and then going on a train was too much excitement as Andrew started acting like a toddler out for the day in the school holidays. Once on the train it was clear I had to calm him down so spent the trip home pointing out all the cows and tractors in the fields to keep him entertained.

Download GPX file of route to load onto a GPS. 42 miles Lowestoft to Norwich
Posted by Cake Crusader at 10:27

Email ThisBlogThis!Share to TwitterShare to FacebookShare to Pinterest
Labels: Closed Down