Today could be a cake crusader cycling classic as we set off for the seaside for the first time on the trip. It should be the same distance as yesterday but both warmer and with a helpful wind. To add to the excitement we will be joined by regular cycling guest Ali, plus his son Tom for the next two days which should give the ability for a fuller cafe review (it didn't) to be carried out as I continue my search for the best cafe anywhere on National cycle route 1.


Despite cycling 200 miles in the last 3 days Chris (Mrs Crusader) is still keeping going and in good spirits, bouyed on by the number and amount of sponsorship she has received for World Bicycle Relief so far.

Before we started it was time for the leaving photo.
Eagle eyed readers might notice lack of cycling guest's in the photo. This was because they had failed to turn up at the designated start time as I hadn't specified that there was no pre ride faffing about built into my plan. Ali insisted on the standard 15 minutes required to adjust bike bags, put things in his car, take coats off, put coats back on again etc etc.

When we did eventually leave I was impressed with the fantastic road surface that Yorkshire (self proclaimed cycling capital of the world) offered so, along with a flattish terrain, we made good time to our first stop of the day albeit with a bit of a level crossing obstacle course to negotiate first.
I had chosen Burton Agnes Hall as our next cafe to test out as it ticked a lot of boxes and was right on National Cycle Route 1. It was also where golfing friends Tracey and Nick would be meeting us for encouragement and a debrief as coincidentally they had been cycling in the area the previous week. The Burton Agnes Hall cafe had a lovely outdoor seating courtyard area overlooking the hall but as it was still a bit drizzly we decided to sit inside where I awarded a high Atmosphere and Ambience (AAA) rating.

First things first and it was time to check out the cakes in order to award the effective cake selection (ECS) rating. It was a good selection with some standards plus some unusual offerings so a high mark. I also thought with 6 reviewers available to me we could check most of the range out so felt rather let down when all we had between us was 2 pieces of ginger and 4 bits of coffee cake. Nick had also asked the staff if his and Tracey's cake could be served on their serviettes, if I didn't know better I would have thought he was deliberately trying to wind me up.#keepcakeoffserviettes
The cakes were very good but I hoped we would get better coverage on the drinks front. This went no better as Tracey and Nick had tea, Tom a hot chocolate (when the only hot chocolate opinion that counts is mine) and Ali a can of fizzy pop. At least Mrs Crusader stepped up by having a Mocha which she thought was excellent and gave a 9 out of 10. As the hot chocolate was also good it was high marks all round putting Burton Agnes Hall cafe into a commanding lead at the top of the 'best cafe on National Cycle Route 1' leader board.
Next Tracey and Nick passed on their top tips from cycling in the area. I had expected them to be full of encouragement but instead Tracey gave us a serious of horror stories of steep hills, muddy tracks and punctures which had my cycling guests nervous wrecks by the time we left and I had to tell them that I was sure our route had none of those things, which turned out to by a lie as the rest of the route had plenty of all of them.

As prep for the ride I had advised Ali he would need some easier gears on his bike to cope with the hills in these parts. Well he had done better than that as when he eventually had turned up this morning he had a brand new shinny bike with easier gears attached. It was very nice if a bit yellow but he was obviously very proud of it. Despite this I was surprised that as we were leaving our stop he asked the Burton Agnes Hall garden centre staff if they had a hose so he could wash his bike down as it had got a bit dirty in its first 30 miles of use. This led to further faffing as a full clean and polish was undertaken.
It was now a 20 mile ride to get to the sea for the first time at Scarborough. It took a little longer than expected as there were a number of hills to go up and down and some of the group were not kings of the mountains and some got a bit scared on the way down and squealed like a girl (although they were a girl so it was probably ok) with the brakes hard on.

We eventually turned a corner and saw the sea for the first time as Scarborough stretch out in front of us.
As a result of our late arrival we were all a bit hungry and tired when we got to our target cafe, Francis tearooms, tucked down a side street. Unfortunately as our route did not go to the seafront then, much to Mrs Crusaders disgust, I had not been able to find a decent cafe with a sea view but trip advisor did say that this one did good cake so it was not all bad.
It was a converted old fashioned ladies hairdressers so each group had their own booth to enjoy their refreshments in.
I liked the idea of our very own tea booth but it caused us a problem as we couldn't keep an eye on our bikes from inside. Ali wasn't prepared to come in and risk having his shiny new bike nicked. I pointed out that if he hadn't just washed it it won't look worth stealing but that didn't seem to help. The very understanding staff then helped us create our own bike safe homemade outdoor seating area on the pavement for us to use.
In terms of rating the cake selection wasn't bad but not the best of the week although I was the only one to order a full slice (coffee for me whilst Chris and Tom shared chocolate).
But then the real bombshell when the waitress announced that they were out of hot chocolate until their next order arrived on Monday, plus they only did filter coffee meaning we couldn't really give hot drinks a good going over, especially when Ali and Tom only had cans of pop, again. However the staff couldn't have been more helpful and what we did have was nice so still a pretty good stop.
We set off again with just 20 miles of flattish, if very muddy track, to cover along the old railway line to Whitby. Sadly progress was painfully slow on a very unhelpful surface not helped as Ali had to steer his bike round any puddle or particularly muddy bit to avoid getting it dirty.
At least, as I waited for the group to catch up, I could enjoy some cracking views of Robin Hood bay.

With only a few miles to go and the light fading fast it was time for the inevitable puncture meaning all of Mystic Tracey's cycling predictions of doom had indeed come true. Just glad I didn't ask her if we will make it all the way to St Andrews as I would rather not know.
To his credit Ali got his leak fixed quickly and we made it to our hotel just as the sun set. To keep with the golfing theme I had picked a hotel overlooking the 6th green on Whitby golf course. This may have been a mistake as it reminded Chris she has another 4 days in the saddle when she could have been playing golf.
Tomorrow looks like being our most challenging day as there is a very hilly start, the most miles of any leg and potentially another long off road section with heavy rain forecast. An early starting is scheduled when hopefully Ali and Tom will turn up with faffing about already completed. Although Ali has not been seen since he set off this evening looking for a hose. 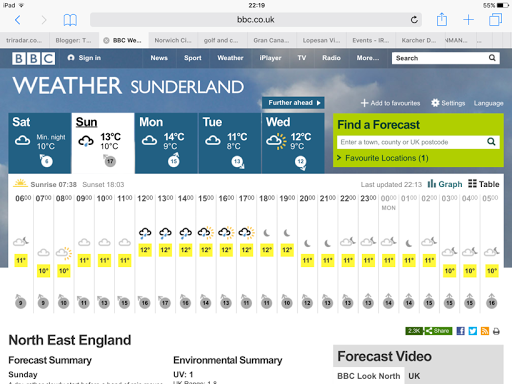 If you would like to encourage Chris to keep going all the way to St Andrews then you can make a donation at her World Bicycle Relief page where you can also find out more about the charities great work in Africa.