The Celtic Trail Day 2
Time Coffee Bar, Carmarhan
Open Mon-Sat 8-6,
Caffi Becca, Middle of nowhere (Efailwen)
Open Mon-Sat 9-4:30
Yesterday had been a voyage into the unknown as we had headed on to the offroad world of the Welsh mountains. Today we would mainly be going on the same route I had done a couple of years ago when I successfully set off on my search for the best cafe anywhere across Great Britain (see St Davids to Lowestoft day 2). It was the day our route most diverted from the Celtic trail as we needed to go a bit more directly to get to Fishguard in one day. I also knew this meant it would be our hilliest day. I decided to warn Mrs Crusader of this but not to mention that my cycling guests on that trip had both got off and walked up several of the hills. As it turned out this pattern got repeated.

It was also due to be the only dry day of weather forecast for this week, which was at least some good news I could share with Mrs Crusader as she fell asleep into her eggs and beans at breakfast claiming to be tired. "Nothing a good hilly ride won't sort out" I helpfully suggested, but it didn't.
The first few miles out of Swansea were a bit of a slog as we had to negotiate busy roads, roundabouts and traffic lights but it wasn't yet hilly. We finally made it to the only off road and flat piece of cycle path we would encounter all day as I foolishly said that the big hills were about to start. Unfortunately Mrs Crusader announced she was still tired so I fed her an energy bar before we set off up the first one.


It was a very steep hill peaking at 21% so not surprisingly she had to get off and push. I pointed out that in today's stage of the tour of Spain that they were racing up a 26% climb. Apparently this was irrelevant as she had no intention of ever riding in a grand tour or up any more steep hills. I decided not to mention that was only the first of 21 hills on the this leg of the route.
7 hills later we made it to Carmarthen and our first stop, the Time Coffee Bar. Mrs Crusader slumped into one of the chairs in the outdoor seating area and declared she was knackered.
I went inside to check out what turned out to be a reasonable cake selection. I had hot chocolate and carrot cake and she had a mocha and millionaire shortbread.
While we waited for them to arrive Mrs Crusader demanded to see the profile for the rest of today's ride. I was pleased as she never normally takes interest in theses things but worried that she might notice we had another 14 hills, including some big ones, to do. Once she had worked this out morale dropped to an all time low.
On the positive side the drinks and cakes were nice but not as good as Bradley's which remained top of my 'best cafe on the Celtic trail' search.

After a quick glimpse of Carmarthen's famous castle we headed out into the Welsh country side. It was very nice with hills, sheep and lush green fields, but mainly hills.
By now Mrs Crusader had stopped talking or even shouting out her pulse rate which she had enjoyed doing so much yesterday. I have to admit the 20 miles before the next cafe stop were some of the bumpiest I can recall.
It was therefore a great relief when we arrived at Caffi Becca (apparently Caffi is welsh for cafe) for our next stop. I had been here on my last ride out this way and knew it was the only cafe for miles around. I decided not to have the hot chocolate this time as it hadn't scored well on the previous visit.
The staff were very friendly as we ordered tea, coffee, chocolate cake and Welsh fruit cake (the only two choices available). During the small talk it transpired that the owner was doing the Welsh ironman, his first, in Tenby on Sunday. So while we enjoyed our refreshments I was able to tell him all about the 4 ironmans I have done, even though I don't normally like to talk about them, while he told me all about his training. He also suggested a short cut we could take to Fishguard which I obviously ignored, although in the end it turned out to be very useful information.

Caffi Becca had been just what we needed although the lack of cake choices and instant nature of our drinks meant it won't be winning the top prize.

We set off again with Mrs Crusader in much better spirit knowing the back of the ride had been broken. However this was to change when I decided to ignore a road closed sign knowing that this sort of thing never normally affected bikes. Sadly 2 miles and 3 steep hills later I discovered that this one did as we came across a chasm where the road should have been.
There was no choice but to go back the 2 miles and 3 steep hills to find a way round. This seemed to sap the final energy from Mrs Crusaders legs and made every hill a real challenge. To help matters I decided to instigate the shortcut after all which at least meant the ride kept to the 69 miles I promised.
Although I have plenty of photos of Mrs Crusader cycling up hill she was never in a position to return the favour so I took one of my shadow at the top of a big hill instead as the next best thing.
The final bit of the ride had the best views and the most downhill as we finally arrived in Fishguard after over 10 fun filled hrs.
As a reward for her hard work today I bought Mrs Crusader fish and chips which, to avoid VAT, we ate on a bench overlooking the sea. You can see why I'm a keeper!
Tomorrow is a slightly shorter ride with a lot less hills. The profile has been scrutinised revealing that it might not be quite as flat as I promised with the hills she is planning to walk up already identified. It's just a shame it's due to rain. 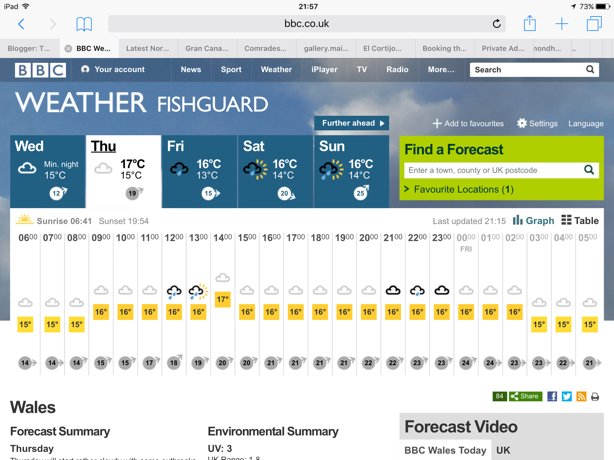 Cafe ratings for cafes reviewed on (or near) the Celtic trail