Cycling in the Alps day 3
The last two days have been building up to the main event on part one of the trip. It’s the Queens stage featuring 3 category 1 cols (mountains) over a 75 mile route and is a famous loop in these parts. You are basically either going up or down for the whole ride.

There had been heavy rain and thunderstorms overnight which were just starting to disperse with the forecast for the rest of the day being for full sun. This again made clothing options difficult but both me and Andrew opted for short sleeves under are rain jackets which we would need for the current drizzle and the descents as they get a bit chilly. (Bit!).

I was keen on an early start especially as our apartment owner claimed that the slowest riders in the annual sportive set off at 6am. We in fact were ready at 8am when it was pedals down and straight onto the first climb.
Well almost as we had sensibly planned to get emergency rations at the local bakery but it turned out to be shut on a Monday, which turned out to be a theme of the day. So we foolishly set off with just bars and gels as backup.

The first col was Cayolle that le cycle magazine had rated in its top 30 prettiest cols, which didn’t seem a great accolade but it didn’t disappoint. It started gently through trees and along the river as the cloud just started to lift.
Andrew had been concerned that today’s ride would be too much for him but I assured him that as holder of the best old rider jersey on the trip he would be fine. During the early section the gradient wasn’t too steep so we rode together for a while.
Then as the gradient kicked up a bit and the scenery open out we got separated for most of the 17 mile climb meaning I had no idea if he was fine or not.
The views were stunning and well deserving of its top 30 prettiest climb place. Being such a long climb even though it wasn’t very steep it was still hard work getting to the top for the obligatory summit photo.
As you may remember from my previous trips to the mountains I’m not found of the motorbikes that whizz past you and make you jump as you struggle to make it to the top of the climb. I personally can’t see the point of doing these climbs at speed although I suspect motorbike rides would be equally puzzled why cyclists do it for fun. However on this trip we have encountered a new much worse phenomenon of the fast open top sports cars which are zooming up and down the Cols. Today I discovered that not only do they do that but at the top of a Col they park up and pose with their cars. They use the dramatic mountain backdrop as they take photos of each other. Then they jump back in and zoom past you on the way down. Give me motorbikes any day.
The way down offered spectacular views but was bloody freezing and I had numb hands and feet by the time I arrived at the first cafe stop.
But for the second time today our refreshment outlet was shut. As I waited for Andrew I managed to find some sunshine to thaw out in and enjoyed one of my two emergency energy bars.
Andrew turned up 22 mins later, and I told him the news so he also enjoyed an energy bar but as we were just leaving the cafe magically opened. However it was only serving drinks at that time of day so we had an average hot chocolate and coffee before moving on to the next Col.
For a rare couple of miles we actually cycled together before turning the corner and heading up the Col des Champs. 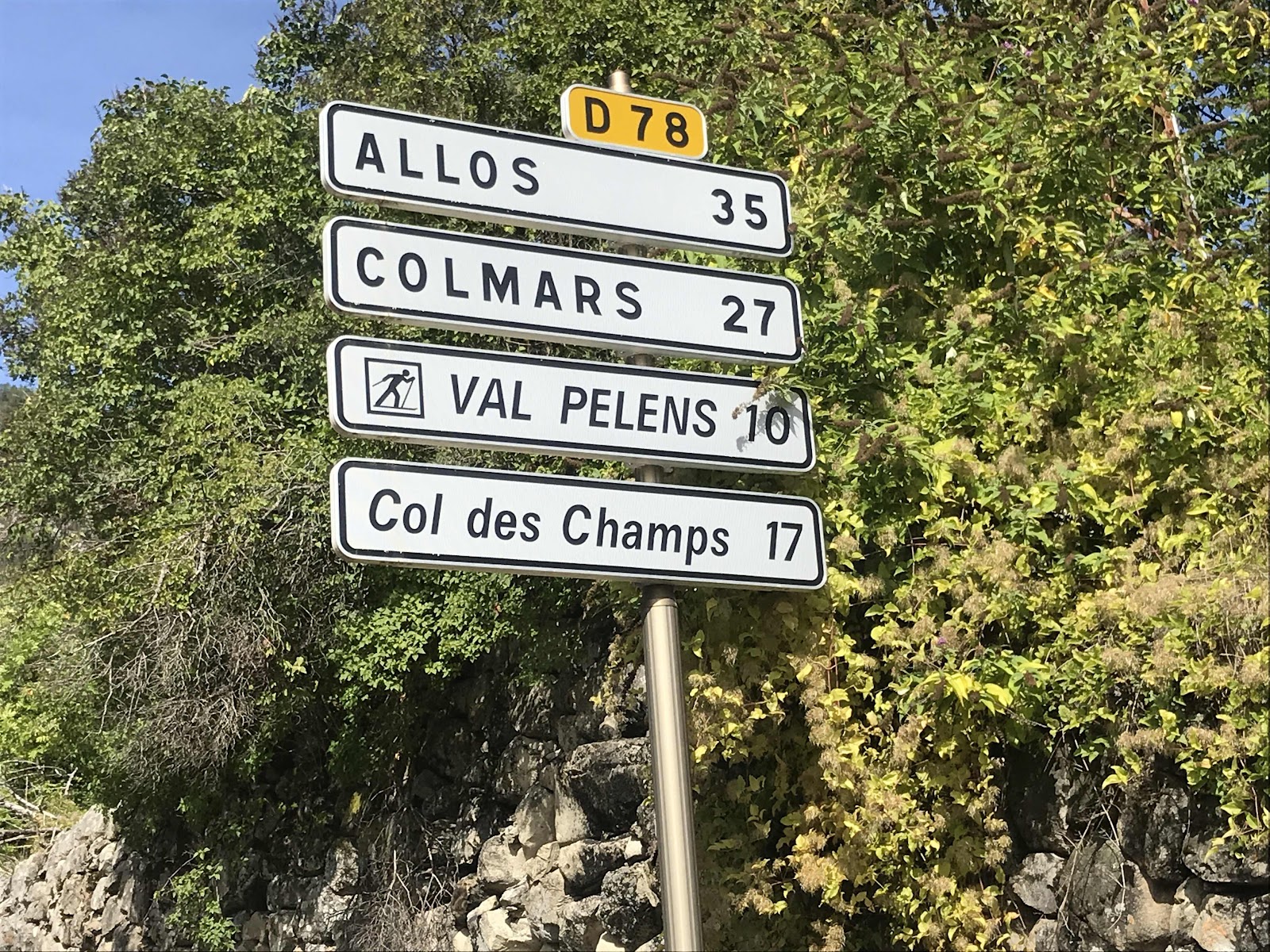 It was a steady start but soon it opened up so you could see the trees and road below. It was another chance to play my new game of where’s Andrew? See if you can spot him in this photo.
No neither could I so I knew it would be another long wait. As we climbed higher the landscape got more bleak and the road more steep but there wasn’t a sole around to see you suffer. Probably as it was two narrow for shinny fast cars.
Eventually I made it to the top where a motorcyclist, who had come up the other side, kindly took my “top of the col “ picture to add to my collection.
I texted Andrew to say it was too cold to wait at the top and from his reply worked out he was about 30 mins behind. I decided not to point out that the toughest bit was still to come as the climb had had a real sting in the tail getting up to 13% in places.

The descent down was a fine one on a newly laid surface, mainly tree lined but you still got good views of the mountains, with a sheer drop on one side and plenty of twists you needed to concentrate on.
At  the bottom I started my long wait for Andrew which was not made any easier as I was a bit cold and worse still we hadn’t found anywhere to get any food yet. Apart from the emergency energy bar and two gels I had not eaten since breakfast so was absolutely starving.

When Andrew eventually, turned up 25 minutes later, I generously allowed him a short rest before we were straight on to the next climb up the Col de Allos (used in TdF 33 times).
The climb started gently so we rode together while I explained, via google research, that I had hand picked the best Boulangerie (bakery) in these parts which was in the next village.
When we got to the next village most things were shut but I checked on google and we had come to the wrong one, our village was actually a little further up the road. Andrew pointed out that there was a cafe open here but I was insistent so we cycled on and then up a steep climb to the nearby ski resort where, much to my embarrassment, for the third time today everything was shut.

There was no turning back so instead we enjoyed our last emergency energy bars. I said there was a much bigger ski resort further on and a cafe at the top so we would be able to get food there as we only had one gel left between us.
As the road was getting steeper me, and the last gel, were soon a long way clear of Andrew who again you will struggle to find in the latest where’s Andrew picture.
The climb was pretty dull and as the big ski resort was deserted and devoid of food I decided to make use of the last gel. From here the road turns right and ramps up a bit through a series of hairpins for the last few kilometres but I couldn’t understand why the climb has been used 33 times on the tour to the Col des Champs once as that had seemed a much better one for racing.
The cafe at the top was closed here too so I texted Andrew to warn him of no food and as it was freezing cold I would be going straight down and back to apartment. But first I got some motorbikers to take my picture while I returned the compliment and took one for them (with a real camera and not a phone!, Very old school).
Once again there were fabulous views at the top but as it was so cold I didn’t stop to snap many.
Having not had any proper food now since breakfast, some 10 hours ago, being quiet shivery and very tired it was sometimes hard to keep concentration so I took it very cautiously to avoid going over the edge which was rather too close in places for my liking.
I eventually rode into Barcelonnette and went straight to the Boulangerie (bakery) where I bought as much bread, pizza and quiche as I could carry on the bike. Despite eating solidly for the next half an hour and having an unprecedented second cup of tea I was still starving when Andrew returned. It’s a good job he did as I was about to eat the food I had got him too.

Even though our nutrition plan had gone completely wrong and spending about half an hour out of the 10 on the road riding together (see profile for why) we both agreed that the ride had been epic with ascent of the day going to Col de Cayolle and descent of the day Col des Champs. No croissant action on this occasion either but there are still two more days of riding left this week so I live in hope.


Like all good tours tomorrow is a rest and transfer day as we head to le Bourg d’Oisans to take on the iconic Alpe d’Huez on Wednesday. We will be hoping to get confirmation on the cafe situation on that climb before we set off.

Email ThisBlogThis!Share to TwitterShare to FacebookShare to Pinterest
Labels: Cycling in the Alps