In search of the best cafe across Great Britain, literally
Day 6 Bury St Edmunds to Lowestoft
Featuring
Angel Cafe Diss
Opening Times Tue-Sun 8-4
Recommended
After 5 hard days in the saddle it was finally time for the procession into Lowestoft to complete the ride. With only 58 miles to do today it should have been straight forward but nothing is ever simple and since I organised the ride the football fixture computer had come out with a home match for Norwich city which I also planned to attend. Therefore in order to get to the match I would need to be in Lowestoft by 1.00 which would make today another challenging ride.

Fortunately my cycling guests were very understanding and more than happy to get up early so we could leave at 7.00 am, I think. I did warn them that if we started to slip behind schedule we would need to put the hammer down (cycle speak for go faster) which they also appeared to understand.

Unlike yesterday I hadn't been able to provide porridge and bananas for breakfast so was worried how they would respond on just energy bars and gels in their stomachs but I needn't have.

I took the lead and kept up a decent pace as we sped through the deserted roads of Norfolk and Suffolk. After about 20 miles cycling guest Dom wanted to confirm that I had put the hammer down early as he was starting to feel the pace. I asked him if he had ever read the fairy tail about the elves and the shoe maker when the elves came out at night to make shoes using their little shoe making tools. Well I explained that the elves tiny shoe hammer was about as much hammer as had been using so far. Once again my morale boosting skills seemed to do the trick and we arrived at the scheduled cafe, which was the Angel just outside Diss, right on time.
There was a choice of indoor or outside seating but as it was such a lovely morning we choose to sit outside. Despite it still being early it was important to have cake to give the Angel a crack at the best cafe across Great Britain title. I was impressed at what was available cake wise this early in the day so awarded a good effective cake selection (ECS) rating. I went for fridge cake.
My cycling guests were now openly revolting and refusing to eat any more cake whereas this was my 13th piece this week. They insisted on fried breakfast again and a pot of tea
My hot chocolate was nice and my fridge cake was excellent so good scores all round but not enough for the Angel Cafe to take the title. The only downside was this was the first cafe this week that had served my cake on the serviette, #keepcakeofserviettes. 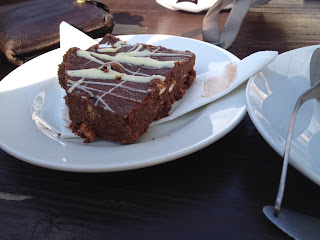 Last week I had a comment on my blog from someone who was not impressed with one of my top ten cafe recommendations as they had had to wait 20 mins for their coffee and scone to arrive. They recommended I try the Angel at Diss, which I was currently doing. It was therefore somewhat ironic that as we were on the wrong end of some big breakfast orders we had a longer wait than they did for our breakfasts to appear. Not normally a problem on such a nice day but on this day it was starting to threaten my deadline. The friendly owner and staff were very apologetic and gave us a complimentary pot of tea to make up for our wait. A lovely gesture, which my cycling guests thought was great but for me it only delayed us further. All in all a good cafe stop and the Angel is worth a visit for cake or breakfast.

We set off again knowing that we couldn't drop the pace but the wind was picking up and so it was tough to keep it up however everyone dug deep and when I once again applied the shoemaking elves tiny hammer they responded well and we made it to our far East end point right on schedule.
We had covered 470 miles and visited 13 cafes in my search to find the best cafe anywhere across Great Britain, literally. I was impressed with the way my cycling guests had kept going and their performance on the bikes to make it to the end. I was less impressed with their cafe rating performance where they had been disappointing in their cake eating and guest hot drink rating role. Before another such trip I will need to see them up their cycle cafe rating game.

There was a clear winner and I can announce that Michaels House cafe in Cambridge was a well deserved champion cafe. I will shortly be sending them a certificate to celebrate their achievement which I'm sure they will be very excited about. (All cafe scores for the ride at end of post.)

The trip has also been excellent training for my calorie neutral cycle ride world record attempt in three weeks time so my focus is now turning to that.

*Only guest hot drink was a cup of tea so maximum score of 7 as it is just a cup of tea
Posted by Cake Crusader at 20:49