There is a lot of wind about at the moment which is the cyclists worst enemy, especially in Norfolk where, whichever direction you are cycling in, it is still always directly in your face. I had therefore been pleased to see that there was supposed to be a reduction in wind speed for yesterdays cafe cycle ride. Not fully trusting the forecast I planned a route West to Dereham in order that we would have any wind with us on the way home. I was joined for the ride by Big George. He is currently taking legal action against me for libel as he claims references about him made in this blog have challenged his macho image but I was still prepared to invite him on the ride.

Despite the 'light wind' forecast we set off and were hit full in the face with a strong breeze which we struggled with for some miles. To help take our minds off the extra effort we were putting in I asked Big George if he had any housework to do on our return. He refused to answer this innocent question and produced a prepared written statement making it clear that there were only certain topics he was going to answer questions on and housework was not one of them. He handed over the list.

We continued in silence until we passed a house with a Dyson cleaner standing outside for sale. With his love of anything hoovering you could see Big Georges eyes light up, especially as it was an unusual pinky purple one which I know is Big Georges favourite colour. I could tell that it took all his will power not to stop and check out its suction action. He clearly wanted to talk housework but as it was not on the list I changed the subject to the weather, which was.

We continued to battled through the gale force wind until we got to Dereham and found the Sticky Bun cafe.
The Sticky Bun cafe can be found in a courtyard off the high street. There were lots of outdoor tables and chairs piled up ready to create an outdoor continental pavement style seating area but sadly we would not be enjoying that facility today so we locked our bikes against them and went inside.
The Sticky Bun is more cafe than tea room in style and there were plenty of customers still finishing their full English Breakfasts despite it being nearly lunchtime. The cake selection was at the service counter at the back of the Sticky Bun and had the 3 cake staples of Victoria, carrot and fruit. There was also the flattest fruit scones I have ever seen but sadly no cheese ones for my on going cheese scone research. I awarded a standard effective cake selection (ECS) rating and choose the carrot cake. I was disappointed that despite the name there were no buns, sticky or otherwise, available and felt this was a missed opportunity by the Sticky Bun branding and marketing team.
As anything to do with cake was not on Big George's list of things we can talk about he deliberately didn't order any cake and once again went for a plain egg sandwich, on white no garnish, which was included on his list as an acceptable conversational area. This is two cafes running where he has taken this approach and I'm beginning to suspect we may see his egg sandwich cycling blog appear in the near feature.
Fortunately coffee was on his topics list so once we had depleted our egg sandwich based chat he was prepared to rate his filter coffee for me. As the Sticky Bun has no frothy coffee machine both our drinks were as good as could have been expected and scored accordingly.
Whilst enjoying my carrot cake, which was nice although the filling got a bit much by the end, we discussed the proposed timetable for this years summer cycle trip. The plan is for myself and some cycling guests to cycle West to East across the widest part of the UK. The aim is to find the best cafe anywhere across Britain (literally). The winning cafe or tearoom will get one of my coveted home-made Cake Crusader winners certificates. 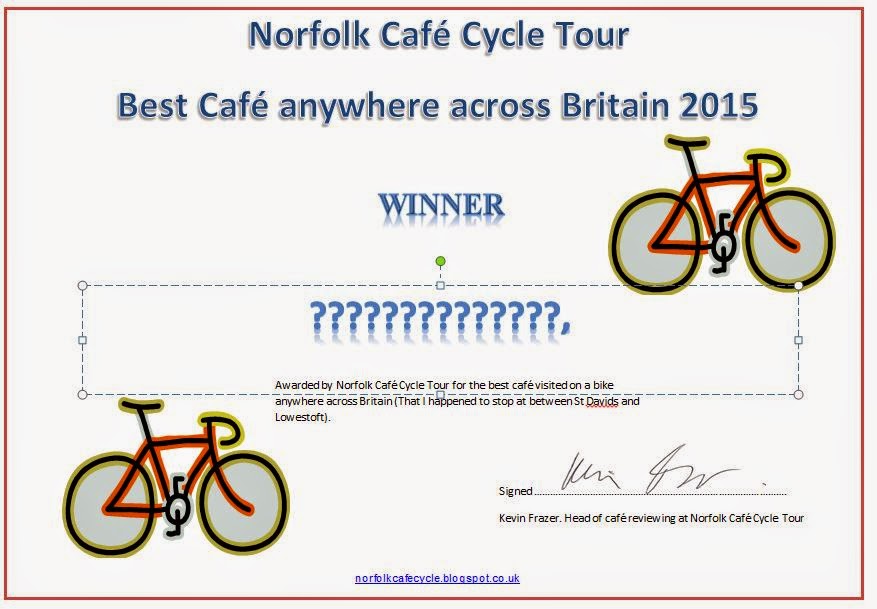 Overall the Sticky Bun was a fairly typical and nice in town cafe and rated at the same level as others of its type.

With wind now behind we flew along towards home. Big George told me about the Rugby club u18s tour he is accompanying his son on this weekend. Rugby is top of the list of topics he is prepared to discuss so no problem there. However I was surprised to hear that he would be in Robin Hood themed fancy dress all weekend as that didn't sound like something that corresponded to his macho image agenda. I assumed this meant I could add fancy dress, Robin Hood and green tights to the bottom of the acceptable topics of conversation list for our next ride, so I did.

Email ThisBlogThis!Share to TwitterShare to FacebookShare to Pinterest
Labels: Closed Down