Rosy Lee’s Tearoom (and Picnic Place),
Loddon,
Opening times Mon-Sat 07:30-17:00,
Sun 09:00-17:00
Highly Recommended
Earlier this year, during the build up to the General Election, I planned to do an election special cafe cycle ride. I wrote to Norwich's two sitting MP's, whose websites both claimed they were keen cyclists, asking for recommendations of their favourite cafe cycle stops. I never heard back from Norwich South's Simon Wright but Norwich North's Chloe Smith sent a nice reply suggesting I try cycling out along the river (see Chloe Smith recommends...). Not saying my blog is influential but Chloe went on to hold her seat where as Wright lost his, so never underestimate the power of cycling and cake.

During the Chloe ride I noted that in dry conditions you could probably cycle all the way along the river to Great Yarmouth on the Wherrymans way path. As it had been so dry recently this looked like an excellent opportunity to test this theory out.

I got up early to put my off road wheels on to my cyclocross bike and arranged with today's cycling guest, Andrew (who is notoriously hard to please), for him to bring his off road machine meaning we both had the right kit for the experience. I'm not a great off road rider so was a little nervous as we set off to the start of the Wherrymans way at Whitlingham Broad in Trowse.
The first part of the ride was on some nice tracks and we sped along admiring the views however as we started to leave civilisation the paths began to get overgrown with stinging nettles and thistles. This may have been ideal country for the likes of Eeyore but I bet he never tried riding his bike though a field of this many stinging and scratchy plants down in 100 acre woods or maybe he did and that's why he was always so miserable.
The overgrown paths, plus the very bumpy nature of the rock hard ground made going very slow which was not helped when I also got a puncture.

We did get some respite on a nice road section at Surlingham, which gave our wrists and bottoms a chance to recover from the constant vibrations they had been experiencing, before rejoining the river path and enjoyed spectacular views of Cantley Sugar beet factory (possibly my favourite Sugar Beet factory anywhere in the UK).
Every so often we came across a random river bank gate on the path. I was in the lead as we approached the latest one and so stopped to open it. Unfortunately Andrew had not noticed I had come to a halt and with a sudden yelp slammed on his brakes and toppled off the side of the path. Fortunately he was a bit winded so couldn't immediately get up giving me enough time to get a photo before checking if he was hurt. He wasn't but it did lead to today's cycling guest cycling top tip.

Cycling guest cycling top tip No. 35. To avoid potential injury whilst out on an off-road cycle ride make sure you look where you are going and don't fall off your bike.
Before continuing we held an emergency health and safety executive risk assessment meeting and agreed new random river bank gate health and safety procedures to avoid any further accidents. From now on it would be mandatory to shout 'gate up' when approaching a random river bank gate.

With the new health and safety procedures in place we continued very slowly, but safely, along the path still being shaken all the way. The path was clearly rarely used as we hardly saw anyone, certainly no Wherrymen, and it was very overgrown making it seem like you were cycling through a field of hay.
The whole thing had become quite unpleasant and I calculated we were unlikely to get to Yarmouth in time for tea let alone lunch. We therefore decided on a new plan and turned off the path to head for near by Loddon.

I had recently heard that Rosy Lee's tea room had introduced a picnic place so we decided to go and investigate that instead. 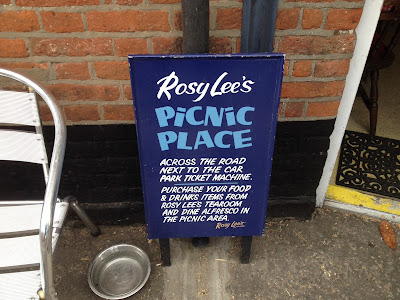 I have been to Rosy Lee's several times (see race against time) but not for over a year although it had always been a good stop. When we arrived we parked our bikes and went inside to check the cake selection so that I could award the effective cake selection (ECS) score. As previously there was a fine range of cakes, including a large and a small Victoria sponge. I therefore awarded a high ECS mark.
We said we would be in the picnic place and placed our order. I went for a hot chocolate, cheese scone (as part of my cheese scone serving temperature research) and zucchini cake (courgette and lime to you). Andrew (who is notoriously hard to please) went for a pot of tea for one plus carrot cake.

With order placed we were told they would bring it all across so we went back outside and wheeled our bikes across the road to the picnic place which is hidden away by the side of Loddon pay and display car park.
There are several different type of garden style tables and chairs in Rosy Lee's picnic place and it was extremely nice sitting there in the peaceful and secluded surroundings. This new feature upped the previous visit's already good atmosphere and ambiance (AAA) rating further.

Our food was soon delivered to us using the gift of the picnic hamper which I thought was a brilliant touch.
My hot chocolate was excellent being a proper thick chocolaty one. Andrew (who is notoriously hard to please) thought it was a good cup of tea but was particularly impressed that the pot contained two tea bags and not the one used by many establishments when asking for pot of tea for one.
It was good to see the cheese scone had been correctly warmed before making its journey across the road in the picnic hamper. It was a nice scone too however it was overshadowed by the excellent cake. Andrew declared his carrot cake as the best he could remember (but he is getting old so that probably only accounts for the last few hours at best). I thought my courgette and lime was even better so added it to my cake of the year contenders list.

With the addition of the picnic place Rosy Lee's score were slightly up re-establishing it's place in my coveted top 10 cafe's list and I highly recommend a visit.

Fully refreshed we decided to head back home on the roads. With very sore bottoms and wrists and with our legs itching from all the stings and scratches I had to file 'riding all the way to Yarmouth on the Wheerymans way' in my, now getting rather full, bad idea's drawer. However shorter circular off road rides still seem like a good future plan.

I hoped it would not be another year before I was back at Rosy Lee's so imagine my surprise when a serious of unforeseen events took me back there the very next day, which I will write about in my next post.

Scores with Rosy Lees based on last three visits