White House Farm PYO Cafe,
Sprowston,
Open Tue-Sat 9:00-5:00, Sun 10:00-16:00,
Recommended
With Andy Murray playing at Wimbledon today I decided I needed to get some emergency strawberries to accompany the match. Rather than just pop down to the local supermarket I thought it would be a good opportunity to go to White House Farm PYO to get some fresh fruit and also check out their cafe.

I managed to drag today's cycling guest, Peter (student son), out of his bed as we set off at the apparently ridiculously early time of 11:30 on what was left of a beautifully sunny morning.

As White House Farm PYO and cafe is on the other side of Norwich to where I live we decided to use the Norwich pedal way cycle routes which weave their way across the city. Despite having to deal with a number of roadworks and traffic lights, that were not in our favour, we safely made it across to the White House farm PYO and cafe turning.

It is at the end of a very long drive and after a while we started to worry that we had turned down the wrong track. However just as we started to despair a useful and informative rhyming sign put our minds at rest.
On arrival we parked our bikes in the racks provided in the outdoor seating courtyard area and headed inside.
It was important that we earned our cake so the first matter to deal with was the strawberry gathering. We each took a punnet and headed for the fruit fields. I had not strawberry picked for a long time and Peter was a novice but once we had located a good area my punnet was soon brimming with berries. However Peter's punnet was barely half full as he claimed he was going for quality not quantity. Using my lower standards I soon had his filled up too as we headed back to the cafe.
Once inside I checked out the cakes so as to award my effective cake selection (ECS) rating. There were only 3 to choose from, Victoria, lemon drizzle or chocolate brownies but all looked very good so got the highest ECS score that number of cakes could have.
As neither me or Peter drink tea or coffee we both went for hot chocolate, mine accompanied with Victoria sponge and Peter's with a brownie. We took our seats in the nice and light indoor seating area as we didn't fancy sitting outside in the hot sun after the exhausting 10 minutes we had spent in the strawberry fields.
We both thought our hot chocolates were good solid examples and scored appropriately. Our cakes were also both very nice and still moist on such a hot day so got our collective thumbs up.
The White House farm PYO cafe was a good venue with nice drinks and cakes and definitely worth a visit especially if you need some emergency fresh fruit as well.

With the bike panniers full of our precious wares we headed back on a different set of pedal way routes to prepare for the big match were at time of writing the strawberries are performing a lot better than Andy Murray who is two sets down. Maybe another bowl will help.

Note: on my most recent visit in Spring 2018 the cake selection was very good 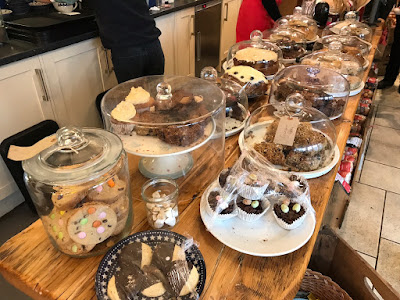 Scores based on two visits

Email ThisBlogThis!Share to TwitterShare to FacebookShare to Pinterest
Labels: Norwich