Across the Pyrenees. Day 1 (Ride over the Col du St Ignace and the Col de Osquich)

Across the Pyrenees
Day1
Hendaye to Montory
With cafe and cake matters under control back in the UK I felt it was time for a new mission further a field. As the Tour de France is only a couple of weeks away I thought it would be a good idea to get in the mood by taking on some of the famous climbs used on the tour in the Pyrenees. I would also take the opportunity to check out some of the cafes that the peloton might decide to stop at for a rest on the tough days in order to find the best one.

Most importantly I would also being on the hunt for the Ultimate croissant (UC). Obviously the 3 F's of croissant tasting will be used to decide the winner. They are Freshness, Flavour and Frenchness (covering authenticity and aesthetics of the croissant). I shall rate both the hotel croissants and those found at each cafe en route. I also had a croissant at Heathrow airport to act as a baseline to rate future croissants against and it set a pretty low bar.

It is a 6 day tour following the route below.
Yesterday we arrived at Bilbao airport, transferred to Hendaye and attempt to rebuild our bikes. As always my Di2 gears did not fit back together as they should but after 3 hours, 2 bike shops (where the mechanics looked like 1960's left wing professors), much hammering and 20 Euros everything was good to go for the Grand Depart in the morning.
The morning started with a traditional continental breakfast and the first French croissant to taste at the Hotel Bellevue. It was ok but I’m sure won’t be the UC I’m searching for.
It wasn't only the croissant but the weather which was disappointing, being damp, as we made our way to the Atlantic Ocean for the official start.
Andrew (Who is notoriously hard to please) is accompanying me on the trip to act as my personal photographer and help with cafe and croissant scoring. As a reward I have put in a picture of him in today’s post.
The next sea we would see would be the Mediterranean. Once we had left the Atlantic behind us the countryside reminded me of cycling in Devon, not that I have, as it was raining, the landscape was green and the route lumpy. There were a couple of named Cols but none worth getting excited about as we easily made it to their summits.
After a couple of hours we arrived at our cafe stop in Ibxassou.
Due to Brexit I can do longer use the EU approved cafe rating system when in Europe. Instead I will just be awarding each cafe a mark out of 10. I found the Hotel du Fronton drinks rather average and they had no food but it was cosy inside so scored a 5.8. There was a patisserie up the road so we got some croissants from there. They were the best yet and rated at about 75% of what a UC would be.
After a long dull section on a busy road in the valley we hit our first decent climb the Col de Gamia (6 km, 5.5% av, 12% max) which was short and sharp although we were rewarded with great views, but sadly no cafe, at the top. Instead a picnic lunch was taken.
After the descent we hit the final climb Col d’Osquich which had excellent signage at both the bottom and then every km. I expect the TdF riders appreciate this sort of thing.
Once climbed there was another sign letting you knew you had finished in case you hadn’t realised. Once again no cafe so any TdF riders wanting a coffee and croissant here would again be disappointed.
With climbing over for the day there was just the descent and a final 15 mile stretch in the valley to tonight’s hotel.
A good day of riding but little progress in finding any good cafes or the Ultimate croissant. Let’s hope for better news on those fronts tomorrow as we tackle some bigger climbs. 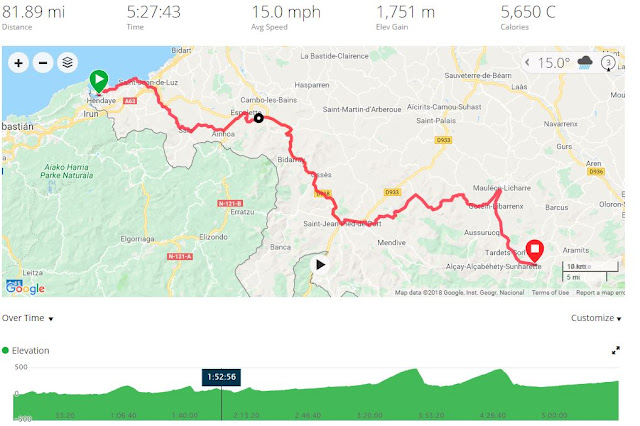