Across the Pyrenees,
Day 3,
Agos-Vidalos to St Lary
Today was the Queens stage as we got to the highest point on the tour via the iconic climb of Col du Tourmalet. But more of that later as first it was time for petit dejeuner at Chez Pierre d’agos and croissant testing. I’m sure as you can see from the photo this was not a good one so hopefully there will be better found during the day. It led to me having to endure a full blown breakfast pastry rant from Andrew.
Everyday starts with a briefing from our French team guide Claude, which consists of some pointing and shrugs as he describes the next bit of the route. We are none the wiser as where we are going but it’s all very French and seems to work.
Despite always setting off as a group as soon as an incline is reached we soon split up with me and Andrew (who is both notoriously hard to please and very old) normally joining up with the other 2 other over 50s into a group full of experience.
The ride started with a gentle 15 mile uphill stretch to the bottom of Tourmalet and as everyone was a little nervous of what lay ahead then for once the group stayed together in a long peloton. At the foot of the climb we had a break and the best croissant to date although still not the ultimate one.
Then it was on to the slopes. The road was a consistent 7-8% for the first 10km as we climbed up the valley with the river beside us.
After passing the midway point it picked up with a series of switchbacks. I got quite emotional as I thought about the tour coming up here in a few weeks time and the likelihood that I would be getting the King of the Mountains points (although I seem to be the only one counting them) today. As I turned each corner I checked I couldn't see any of my rivals behind me as I pressed on.
Unfortunately the French authorities were out repairing the roads in preparation for the TdF peloton tarts who don't like pot holes in their roads (I hope the tour never comes to Norfolk then) so I had to stop a couple of times to brush off the stones that were now sticking to my tyres. However the views and thoughts of croissant at the top kept me going.
Once at the top it was time for the iconic photo and to test the croissant.
The croissant was pants so I won’t bore you with the third photo of one today instead here is a picture of Andrew finishing about 30 mins later ranting about tar.
The stoney tar had taken its toll causing a broken derailleur and slow puncture in our group so by the time everyone was at the top, group photo had been taken, bikes fixed and lunch eaten it had been 2.5 hours since I reached the summit and I was itching to go. Just as we set off I noticed I too had a slow puncture so I was last down a very nice long descent.
As soon as we reached the bottom it was off again up Col d’Aspin (13 km, 5% av, 8.3% max, 650m ascent). Another lovely climb that started gentle but turned brutal over the last 5 km as it winded through the woods. This was much more the type of climb that me and Andrew are used to from our trips to Italy and Slovenia.
Once at the top it was a race to beat the local cow over the finish line.
The cow was gracious in defeat but had put her bike away before the photo was taken.
There was no cafe or croissant at the top which was probably good as 4 croissants in one day might be a bit much. Andrew turned up 15 mins later with a big finish impressing the local paparazzi.
This just left the decent and ride through the valley to today’s hotel. Andrew decide to make a break leaving me to lead in the rest of the over 50s team home. However this moment of madness lead to suspension from the old peoples team and a hefty fine. Karma was maintained when he got lost in town looking for the hotel, meaning my peloton got back first and I was able to baggy the best bed.
It was another great, if rather long, day of cycling. I got maximum KoM points and Andrew still holds the best over 60s rider jersey. Things had been better on the croissant front too but I’m increasingly concerned that decent cafes will be hard to come by on the TdF as the two I tried today, at the bottom and top of the Tourmalet, were both distinctly average despite the stunning views

Tomorrow’s climbs are slightly less well known so hopefully may have better offerings. 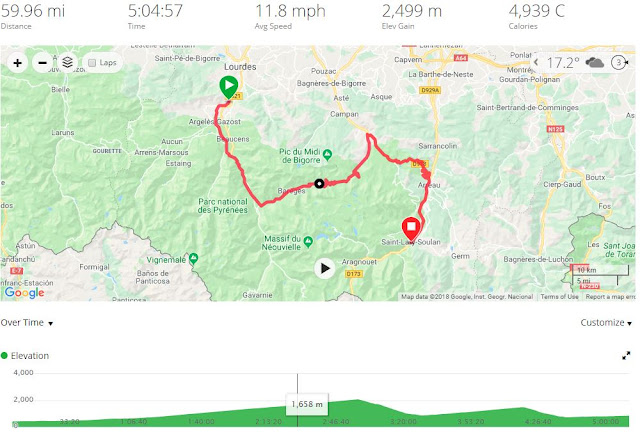