Across the Pyrenees,
Day 5,
Lorp Sentaraille to Ax les Thermes
After yesterday’s long day and steep climb there were some tired looking bodies at breakfast this morning so the hopes of holding a tight peloton to the first climb looked small. And small was the best way of describing this mornings croissant offering which was a shame as it was a very good one but I couldn’t have a mini croissant stealing first place.
The morning was a day of pelotons, punctures, pastry’s and panting as surprisingly we started cycling in a nice peloton along by the river and held it together.
Two of our group then decided to make a break for the next cafe stop and were rewarded with a long wait as a puncture needing attention in the main pack. As self appointed team inner tube changer I volunteered to fix it. The first tube I was handed turned out to already be punctured so also had to be changed for one which turned out to have a broken valve. Eventually a proper British inner tube was found and I had us back on the road just as our support vehicle arrived. (Thanks for turning up, I said).
A short stop at the next cafe, which turned out to have excellent (if not winning croissant) and apparently the best coffee of the week, got the group back together. It was voted our finest cafe to date and one worth the TdF riders stopping out if they require refreshments during the race here.
Yesterday evening, fellow group member Des challenged me to race up the next col (col de Port, 12.6km, 4.7% av, 6.5% max, 630m ascent). I was a little worried as it was not steep enough for my liking and as Des is pretty speedy on the flat then the incline may not take it out of him. As we started he shot off into the distance but I remembered the story of the tortoise and the hare and before half way I passed him.
Des has much to learn about pacing a climb and today I felt I had helped by teaching him a cycling lesson, all part of the service. Although, as it turned out later, he is a quick learner. With no one left to race I was passed by a small French rider so I took him on instead as we battled each other up the rest of the Col until he did me with his sprint finish. Damn you little French cyclist.
After a rather long lunch break and now over an hour behind schedule it was time for a long descent to the start of the next much steeper climb.
This was an unnamed climb but over 2 miles long and very steep and by now it was very hot. Once again Des threw down the gauntlet but I was more confident on this terrain. I went for a pacey start but despite his heavy breathing Des was hanging on. As I drew ahead, albeit slowly, I thought he would give up but he kept at it as the gap only gradually grew and I made it up first knowing I had had to work pretty hard to maintain my maximum KoM points (although nobody else seems to be counting).
It was so hot a quick shower under the local village tap was order of the day.
From here we had the most scenic section to date through 12 miles of lumpy road with magnificent views which the camera barely does justice to.
Sadly the final col (col de Marmare) was closed so we could only do the first 6km. When I arrived I discovered Des was a fast learner as he had ridden the previous section quickly and was already halfway up the climb. Despite my best effort I had no chance to catch him and by the time I got to our bail out point I found he had already set off for the hotel. I had already more than enough KoM points to give up one here and be crowned King of the Mountains tomorrow (by me) so I didn’t begrudge him his win.
I gave up the chase and enjoyed more splendid views before arriving at the Hotel some time before Andrew allowing me to claim the double bed (again). It’s tough love but hopefully he will respond with a faster time on the final leg to the Mediterranean Sea tomorrow. 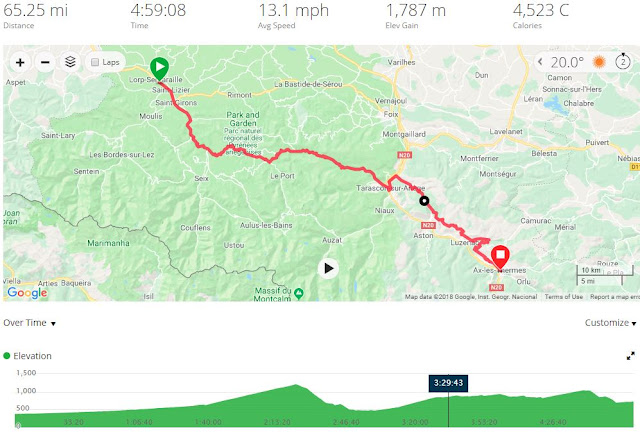