Across the Pyrenees
Day 2
Montory to Arrens
Day 2 started early with one long climb planned towards the end of the day. But before cycling got underway it was petit dejeuner and time to check out the croissant at the L’Auberge de l’Etable hotel. It looked promising as it was the first with any form of curve but it was over cooked on the outside and under on the inside so not a winner.
With that important part of the day complete pedals were down at 8:00 for another long stint in the saddle. Right out of the hotel we were straight into a short rise and that was order of the day for the first section as the road went up and down for many miles but with  a distinct lack of cafes.
We then went to Asasp-Arros which it was important we got to as soon as possible.
From there we started climbing through the valley to the beginning of today’s big Col (Col de Soulor 12 km, 9% av, 900m ascent). Even this was tough as the weather warmed up but the scenery was lovely and we had our first site of snow covered mountains.
After the hors d’oeuvre it was time for the main course. Originally we had planned to climb the col d’Aubisque, which is the last climb scheduled on this years tour, but there had been a landslide so it was shut meaning that us, and possibly the tour, did this Col instead.
After a steep start for the first km then the next 11 km were at a fairly steady 7% and I was up in just over the hour.
Knowing that Andrew is slower on the way up than me (as I often like to point out) you might be wondering how the above photo was taken. I may have given the impression it was just the two of us doing this ride but I have to confess we are 2 of 11 (I didn’t know the other 9 before the trip) plus two guides supporting us in vehicles. So they kindly took that snap, plus this one of me in action as well.
Once at the top it was time for a well earned rest and, more importantly, to test the cafe and croissant.
But after all that effort there was no croissant, only waffle available. Spookily though, it was better than any of the croissant I have had to date.
There was just time for the top of the col photo, and to read a “short” novel, before Andrew arrived. We were both disappointed with the cafe and it only got a 5.4. I’ll warn the TdF peloton in case they do have to come this way in the end.
The day finished with a very long and easy downhill to the hotel.


Tomorrow is the big one as we climb the Col du Tourmalet which is both the first one ever ridden in the TdF in the Pyrenees and also most climbed col in the history of the tour. It is 19 km, 7.4% av, 13% max and 1400m ascent so ride sounds good but let’s hope the cafe and croissants up their game.
Day 2 Route 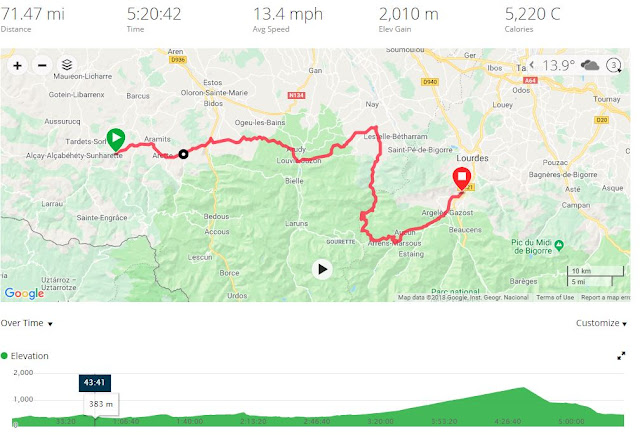