India Coast to Coast day 1 and 2
I felt the time had come to expand my horizons and check out the cafe cycle culture further afield. I have now cycled to, and reviewed over 300 cafes, mainly in Norfolk and Suffolk, but I have also had several visits into Europe to check out the cafe and cake scene there so after much research I have decided on India for a new next adventure.

India works on several fronts.
In fact this trip will tick more boxes than I currently own!


To make things easier I have decided to go on an organised trip with the Exodus travel company on a route in Southern India. The ride will  be over 400 miles coast to coast which should be far enough to complete my mission.
I am taking Mrs Crusader as my cycling guest although as well as our guide there are a potential 8 more cyclists who I may be able to use in a cafe rating emergency.

I don't know how many cafes or tearooms (if any) I will be able to rate but hopefully in 400 miles time I will know a lot more about cafe cycling in India and how it compares to Norfolk.

The expedition started with a flight from London to Mumbai which was straightforward enough and everything went smoothly until Mrs Crusader broke the Indian immigration system and caused a delay, but once fixed we were allowed in and successfully got our connection to Chiennai.

Here we met up with the rest of the group before a 3 hour minibus ride to our first stop in Puducherry on the south east coast. On the journey we learnt much about the law of the road in India. It operates quite differently from our system in Norfolk where most tractors will move over to make room for your bike. Out here the bigger the vehicle the more right of way you have. So lorries are king and bikes have to get right out the way. Horn honking is compulsory and there is no such thing as a cheery wave. Overtaking can take place on either side and despite what it looks like 3 vehicles can fit across even the narrowest roads. I thought the Indian driving approach added yet another notch of excitement to our trip but Mrs Crusader was not yet sure.
On the way we stopped off at Manabalipuram where we went to today's temple of the day which was carved out of the rock.
Over lunch all the punters introduced themselves and surprisingly our group of 9 didn't have any other cycle cafe rating bloggers in it, so there would be no competition in my mission to check out the Indian cafe scene.

After a bit of rest we collected our bikes and set them up before a quick ride to get used to them.
No cafes had yet been checked out but we were now ready for our first proper ride.

On the morning of day 2 we met for an acclimatisation ride. It started with an eventful motorbike, tuctuc and people dodging session through town until we found ourselves on the shore of the Bay of Bengal, which was our official start point East. I was very pleased that we took our bikes all the way to the waters edge for the official start or I would have felt short changed.
Once on our way we finally encountered some much quieter roads where we could get up to speed. Progress was only stalled as we had a short stop at today's Temple of the day which was in honour of a Hindu goddess who had kindly killed a demon with two of her many bare hands and therefore saved the world. Thanks Hindu goddess.
Despite the distraction of todays temple of the day I was careful not to lose focus from the main purpose of this trip; to find out if a cup of tea can ever score more than 7 out of 10, so I was pleased that we would be visiting a cafe at our next stop Auraville.
The cafe was a bit modern for what I was expecting (although future Indian tea shops didn't disappoint) and we were given arrival lemon soda (which is not tea) for our drink.We also got a posh onion bhaji (which isn't cake) but was very tasty. I will be surprised if the visitor centre cafe at Auraville becomes my number one Indian cafe and I was none the wiser on the tea rating front either.
But what is Auraville anyway. According to a short but informative information video, it is a city dedicated to the ideal of human unity for people to discover themselves in a spiritual sense. No one owns it but if you want to live there you must perform meaningful but selfless work for the good of everyone in return for board and lodgings and plenty of meditation.

The centre piece is the Matrimandir which looks like a giant golf ball from the set of Doctor Who. The short and informative video had explained you can go inside for meditation on the path to enlightenment but access is only for those who are serious about discovering themselves and I wasn't so I didn't.
Our ride finished by returning to the hotel to prepare ourselves for the real start tomorrow.
Although only a short cycle it had been an enjoyable one and I was starting to get the hang of cycling out here, I even started to adopting a gung-ho approach to ringing my bell; either to warn people I was nearby or sometimes just because I felt like it. I was no further forward on my tea research, failed to discover my inner self and hadn't found the best cycle cafe in India yet but it was early days and hopefully I'll have more luck when we set off for real with the first 60 miles towards the West coast tomorrow. 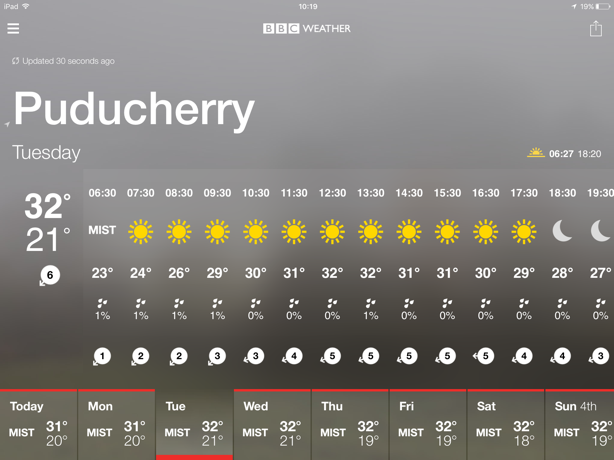 Email ThisBlogThis!Share to TwitterShare to FacebookShare to Pinterest
Labels: India coast to coast day 1 and 2