It was to be a shorter ride today as my search for a better than 7 out of 10 cup of tea continued. We had been told that no early morning alarm call would be required today and the reason became apparent as the early morning local wailing did the trick instead. After a breakfast of curry and toast it was time to hit the road. Today we had no city to get through so were off to a fast start to a nearby town.

The next part of the ride was to put all my new found Indian bike handling skills the test. First it was another race through rush hour using my now legendary bell ringing skills to  make it to the other side.
Next we rode along the river on an old crumbling road which had little traffic but plenty of potholes and bumps.
We crossed a bridge, where it was pointed out that there were crocodiles in the water (and if you look closely you can see the tops of two sticking out). We don't get many crocodiles in Norfolk at this time of year so it was good to see some in the wild.
This took us to a quick elephant based Temple visit (one of several contenders for temple of the day; winner to be announced at the end of the post. I also put all today's temple entries are on my tweeter feed, exciting stuff!)
At last it was time for our tea stop and it was a real treat.
Not only were we having tea but deep fried potato fritters and doughnuts as well. Big George, like any Scotsman, would have loved it.
Just as your thought it couldn't get any better some benches appeared to create a tranquil pop up outdoor seating area on the roadside.
Here I discussed the cafes ratings with the other punters and although the deep fried things were good the tea was our least favourite to date being a bit too bitter for our western tastes. Although nice this tea room couldn't surpass the excellent ginger tea stop from yesterday.
Back on river path we ploughed on as the temperature continued to raise to a rather warm 37C. It turned out we were now riding on the regions Ox cart superhighway and it was rush hour. It was total Ox cart gridlock.
We were stuck in this traffic for over a minute before we could eventually getting going again. But our progress didn't last long as Mrs Crusader developed a puncture. Fortunately the support vehicle was close at hand and like a scene from the Tour de France Mrs Crusader raised her hand and our mechanic came charging out the van with a spare wheel to quickly have her on her way. I reminded her that this was a service she should not get used to back in the U.K.
After 42 miles and sauna strength temperatures it was time to stop for the day and lunch, after which there was a chance to visit a mega temple at our overnight stop in Tanjoure.
It had been another lovely ride on a beautiful sunny day and we had seen lots more of Indian rural life in this agricultural region. Still not found the great cup of tea or über tea shop yet but with another 60 plus miles to do tomorrow I'm optimistic of success.

Oh and today's temple of the day was not surprisingly the mega temple at Tanjoure which was absolutely templetastic. 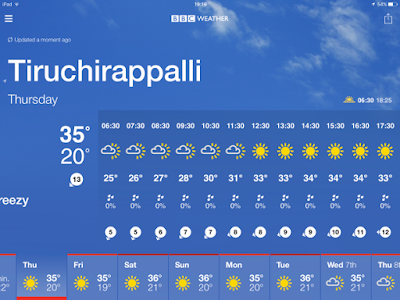