India coast to coast day 10 and 11
Day 10 was the shortest ride of the journey but it was packed with drama as Mrs. Crusader became the centre of a medical emergency.

The ride was just 15 miles long and took us to the other side of a big lake that had inconveniently been placed in our way en route to the Arabian Sea. It mainly consisted of back roads alongside some rivers and streams. As we crossed a little bridge over one such stream, Mrs Crusader overestimated her braking skills and ended up in a heap on the ground.
Fortunately she stayed down long enough for me to get the necessary photos. I also had time to check the travel insurance cover in case a helicopter evacuation was needed (it wasn't). Our guides were very excited as they were able to get out the first aid kit that they had been carrying for nearly a fortnight.
The diagnosis was a slightly grazed knee which required an industrial sized plaster to be applied before the medical emergency could be officially resolved.
For health and safety reasons Mrs Crusader was asked to carry her bike over all the remaining bridges.
After so much excitement everyone was in need of refreshments as we arrived at today's tea shop. I'm pleased to report it was another good one being slightly off the beaten track.
As it was early we were first customers of the day but our handsome barista soon had his state of the art coffee making facility up and running.
He obviously knew his stuff as the tea was a nice clear one that scored well making this teashop the second best in India.
We continued round the lake admiring the views before parking up our bikes for the day.
The rest of the day and night was spent on a cruise round the backwaters on a converted rice barge before our final ride to the sea could begin.

Day 11 of the journey started early as we headed for the coast. It was just a few miles away along the back roads. When we left the Bay of Bengal we had dipped our back wheels in the sea so when we arrived at the Arabian Sea it was the front wheels turn. Albeit with a slight misjudgment of the tide.
The first part of our mission was finally complete but we still had a 30 mile ride up the coast to our final destination meaning there was still time to see if a new tea shop could make it into the Indian top 3. (See bottom of post for top 3 summary).
The first offering was a seaside town stop but the modern look and feel were not to my tastes and for some reason the barista had decided to keep his shirt on.
The tea was consistent with the high quality we had enjoyed in Kerala but with only packet sponge cakes available this tea shop remained just outside the top three.
We now set off on the charming coast road with posh houses separating us from the sea. Occasionally we crossed an inlet where there were fishing nets in action.
After too short a time we came to our last stop. It was an old new hybrid style tea shop mash up but overall a little bland.
It did have the best Indian snack we had tried, which was a sort of deep fried ginger cake, but the tea was only average so again it just missed out on top 3 glory.
As a bonus we were offered some fresh pineapple juice made from some of the baby pineapples we had seen in the wild earlier in the week. It was excellent but as pineapple juice is not tea it could play no part in this cafes rating
Then, with a final push up along the coast we were, sadly, at our journeys end.
As I sat under a nearby banyan tree, meditating, I reflected on what I had learnt.

1. South India is very hot and it doesn't snow much (or possibly ever).
2. White tea is called chai and should be avoided.
3. The people are very friendly and like to wave, a lot, waving back is encouraged.
4. Your bicycle bell is your best friend and more critical than your brakes.
5. The best baristas don't wear shirts.
6. There are over 70 million people in the state of Tamil Nadu which is 7.77 times more people than bicycles in Beijing (and that's a fact)
7. Never ever let your wife go out alone to do some shopping as she is likely to come back with a massage.
8. India is only the second largest producer of tea in the world so do your tea homework properly before you come here on a tea based mission.
9. The best tea shop in India is in Caddaloor and serves excellent ginger tea and Indian snacks.
10. No matter where you go in the world, at the end of the day tea is just a cup of tea and I will be sticking with hot chocolate as my cafe stop beverage of choice. 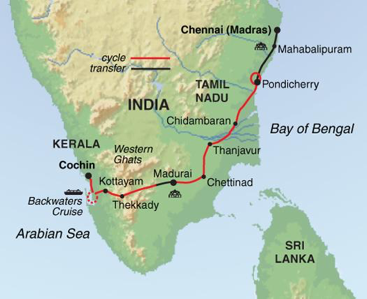 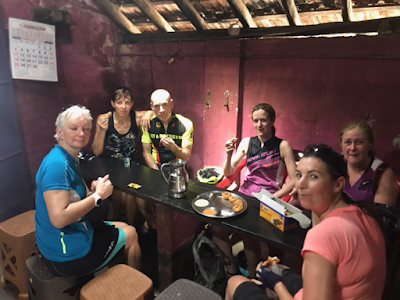 2. Kudavechoor. Off the beaten track gives this quaint tea shop a calm and relaxed feel. Very good tea and the barista certainly knew his stuff. 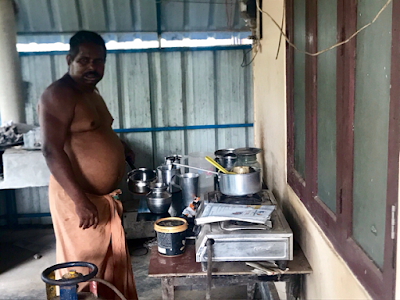 3. Vilangupara. Was in the up market rubber plantation area and had a fabulous indoor space plus room to sit outside. The tea was the best I found. 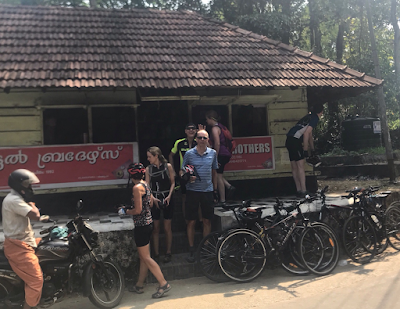 Email ThisBlogThis!Share to TwitterShare to FacebookShare to Pinterest
Labels: India coast to coast day 10 and 11