India coast to coast day 9
After the disappointment of not finding that special cup of tea at the tea plantation yesterday, my morale was low as we set off on our last long journey of this trip. It was a 50 mile ride starting in the jungle. As a townie I'm not used to the ways of the jungle and I was awoken at dawn by the noisy jungle birds making a right racket. Apparently you get used to it if you live in the jungle for long enough, but I wasn't planning to.

Today's ride had a gentle start as we finished off yesterday's down hill section and returned to near sea level although the route still had lots of small sharp hills to keep us interested so there was still work to be done.
Although we had been in the jungle for a couple of days we had not seen a tiger despite the fact they live in the area. I was told you were unlikely to see one just wandering around and needed to go on a proper tiger safari, without the bike or bell. There was certainly no chance of seeing one now as we had moved into rubber country with plantations on either side of the road and tigers don't like rubber.
We stopped at one such plantation for some rubber facts:
1. India is the largest producer of rubber in the world (unlike tea)
2. After seven years you can start getting rubber juice from your tree
3. A rubber tree will make you a profit of about 20 rupees (22p) a day.
I noted the rubber facts down in my Indian facts spreadsheet and we were on our way again. Rubber was clearly a profitable business to be in as there were a lot of big posh houses lining the roads.
It was time for today's tea stop and it was a good one, in keeping with the upmarket neighbourhood. It shot straight into my top 3 best tea shops in India.
There was space to sit outside plus a spacious indoor seating area with benches and tables. The female section of my now highly trained tasting team opted to hold a formal ginger tea review panel while I sensibly stuck with black tea therefore rendering their input useless.
I have to admit it was a pretty good cup of tea and rather refreshing in the hot weather but at the end of the day it was still just a cup of tea.
After the disappointing lack of tigers I had been particularly looking forward to the next part of the day as we went on a short pineapple safari. We were lucky enough to spot a young one asleep hidden in a bush of spiky leaves. It was very cute but we were told not to disturb it as we crept back to our bikes.
The terrain was now constant up and down in temperatures reaching the high thirties so we were tired and thirsty when we arrived at lunch. Seeing tropical fruit in the wild had been a great experience making my fresh pineapple smoothie even more enjoyable. I wondered if my baby pineapple would end up in a blender one day too. I hope so.
From here the ride continued in the same style for a few more miles before we had cleared all the hills and we were back on the flat. The countryside was now similar to the start of our trip with banana and palm trees lining the roads and lots of paddy fields. The Ox were back in force too. It made for an easy last few miles to our overnight stop.
I was pleased to have finally had a nice cup of tea from a tea shop but had pretty much given up on any thought of finding anything better than "just a cup of tea". The final challenge now was to get to the Arabian Sea in one piece. 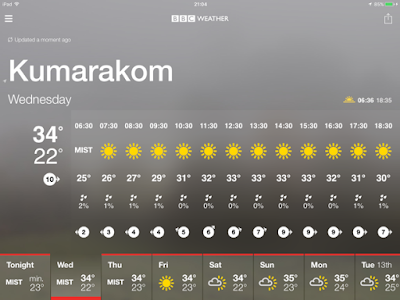