India coast to coast day 6 and 7

India coast to coast day 6 and 7
During the last couple of days we transitioned across to the region of Kerala. Day 6 was a bit of a slog as we traveled 60 miles along some busier roads with not a lot to see. As a result the pace was high but so was the temperature that peaked at 43C. At one stage Mrs Crusader employed 2 Indian school girls on bikes as domestiques to lead her along until the next refreshments stop.
We had 3 tea shop visits during the day but none performed particularly well on either the AAA or tea front and didn't move my tea or tea shop search forward.
After lunch our guide said he had recently been told about a beautiful village worth checking out and as we were making good time offered us a complementary ride there to see what it was like.
It was very pleasant and nice to be off the busy roads but sadly it didn't have a tea shop.
At the end of our complementary ride we found ourselves flying down the hard shoulder of an Indian motorway. This might sound a scary proposition as it was like riding on the A47 but even with buses and lorries whizzing past I knew I would be safe, as long as my bell kept working.

We finished the ride with another race across a busy town that included the last of our 3 tea shop stops before the day was done
Day 7 started with a final temple. We are moving away from the Hindu region so will soon only have churches and mosques to look at. But it was a cracker and the second biggest in southern India. A fitting end to my selection of temples of the day.
As there were no roads suitable for cycling then we hopped on the tour bus for a 60 mile transfer to the start of the next section. It was much greener here and also included our first site of mountains so I was interested if there would be an improvement in the quality of the tea as well.
At the Temple in the morning I had purchased a map of India from a very insistent gentleman. It only cost me the equivalent of 55p but apparently this is well above the market rate. When I discovered it was not only a map but the flip side was a fact sheet as well I felt it was a veritable bargain. The first of many facts I have now learnt is that In the region of Tamil Nadu there are over 77 million people and I think I have waved to most of them as I have gone past on my bike.
Our tea stop was excellent and possibly my favourite as it was good tea, was slightly off the road so less danger of being hit by a bus, our fellow tea drinkers were very friendly and there was both an indoor and outdoor seating area. Sadly no food so we had to make do with biscuits keeping its overall rating down.
The tea itself was good and some of the rating team reckoned the best of the week (other than the ginger one) but still not above the mystical 7 out of 10.
It was now time for the only climb on the trip which was a 3 mile one going up about 400m. On the way up you could see the plains behind us as we were entering the more hilly Kerala region.
The main attraction was the number of monkeys lining the route, like our very own Tour de France crowd (only more marsupial based). Some even ran alongside you just like in the real event although some of the punters didn't appreciate their support.
After a couple of days of very different cycling we are now nearly a week through my Indian mission of trying to find a cup of tea worth more than 7 out of 10. It may be my theory is correct and no such thing exists but now we enter the tea plantation area so hopefully the quality will improve.
Tomorrow is a rest day while we regroup before the hillier sections start.

Day after Tomorrow's weather forecast (temperature down to a chilly 24C) 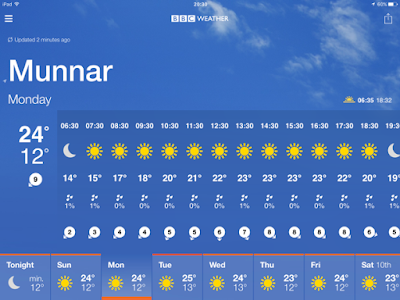 Email ThisBlogThis!Share to TwitterShare to FacebookShare to Pinterest
Labels: India coast to coast day 6 and 7