Dover to Norwich on NCR1, The missing link. (Day 1 Dover to Margate)

You may have noticed that over the last few years I have been on a mission to find the best cafes on the national cycle routes. It all started on the great ride North from Norwich to St Andrews on National cycle route (NCR) 1. This was followed by the less than successful trip in Wales on NCR3 which I'm not allowed to talk about as it still upsets Mrs Crusader. Then last year we went along most of NCR2 by the seaside south coast from Exmouth to Dover.

At the end of the trip I noticed this sign and my eyes lit up while Mrs Crusaders shoulders dropped as she new what she was doing this summer. Yes we were going to complete the job and join the NCR1 and NCR2 rides by cycling from Dover to Norwich doing the missing link, Hurrah!!!
So this is why we found ourselves and bicycles locked and loaded at Norwich station ready to board the train of adventure to Dover and the start of another fun filled cycling and cake extravaganza (hopefully, unless Kent is like Wales). 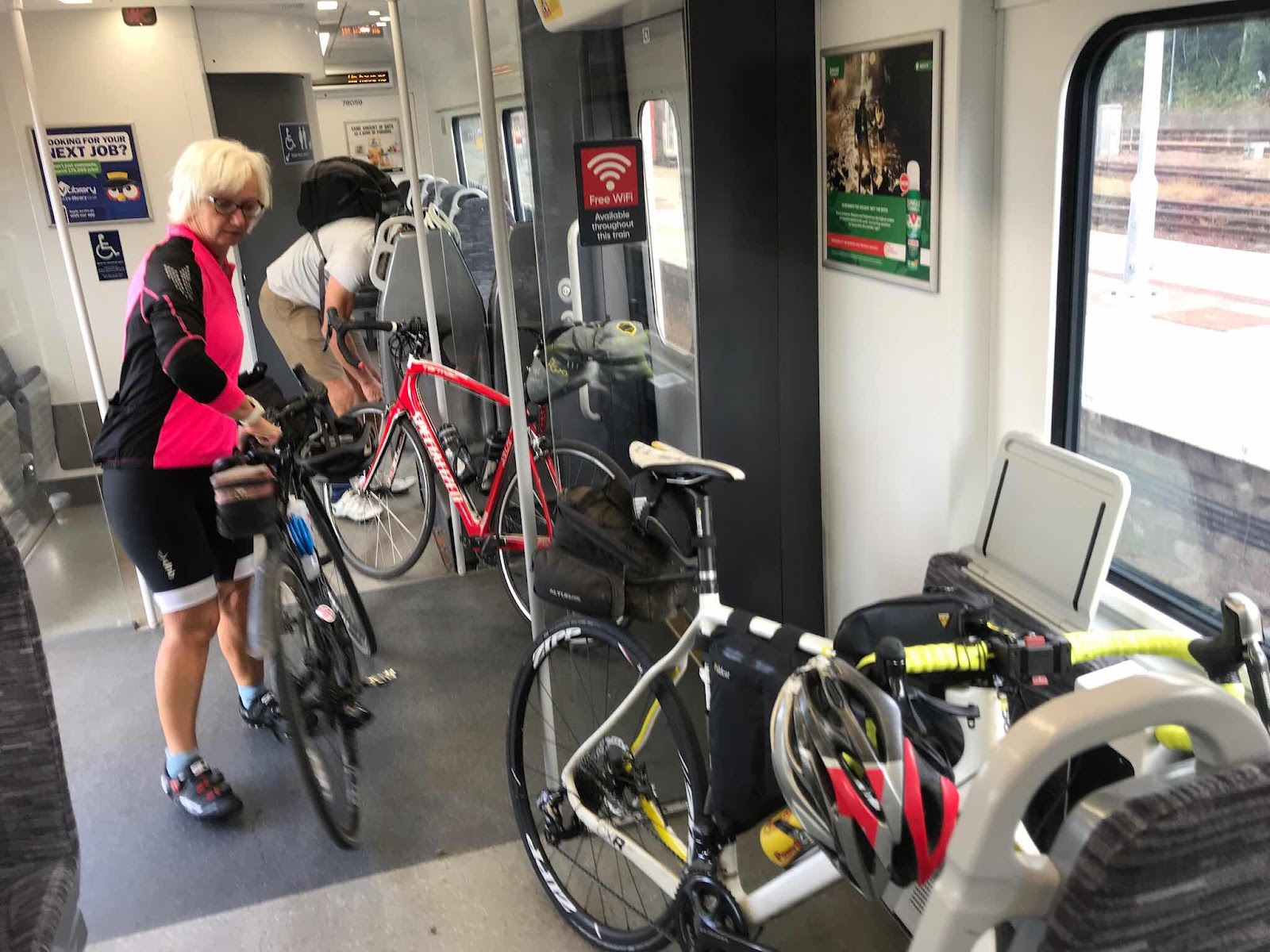 The route would be as followed and split into 5 sections of 50-60 miles.

The train journey went smoothly as we changed at Stratford, crossed town to Stratford international and sped down to Dover. The only drama was when Mrs Crusader got a telling off for putting her feet on the seats but was let off with a warning. 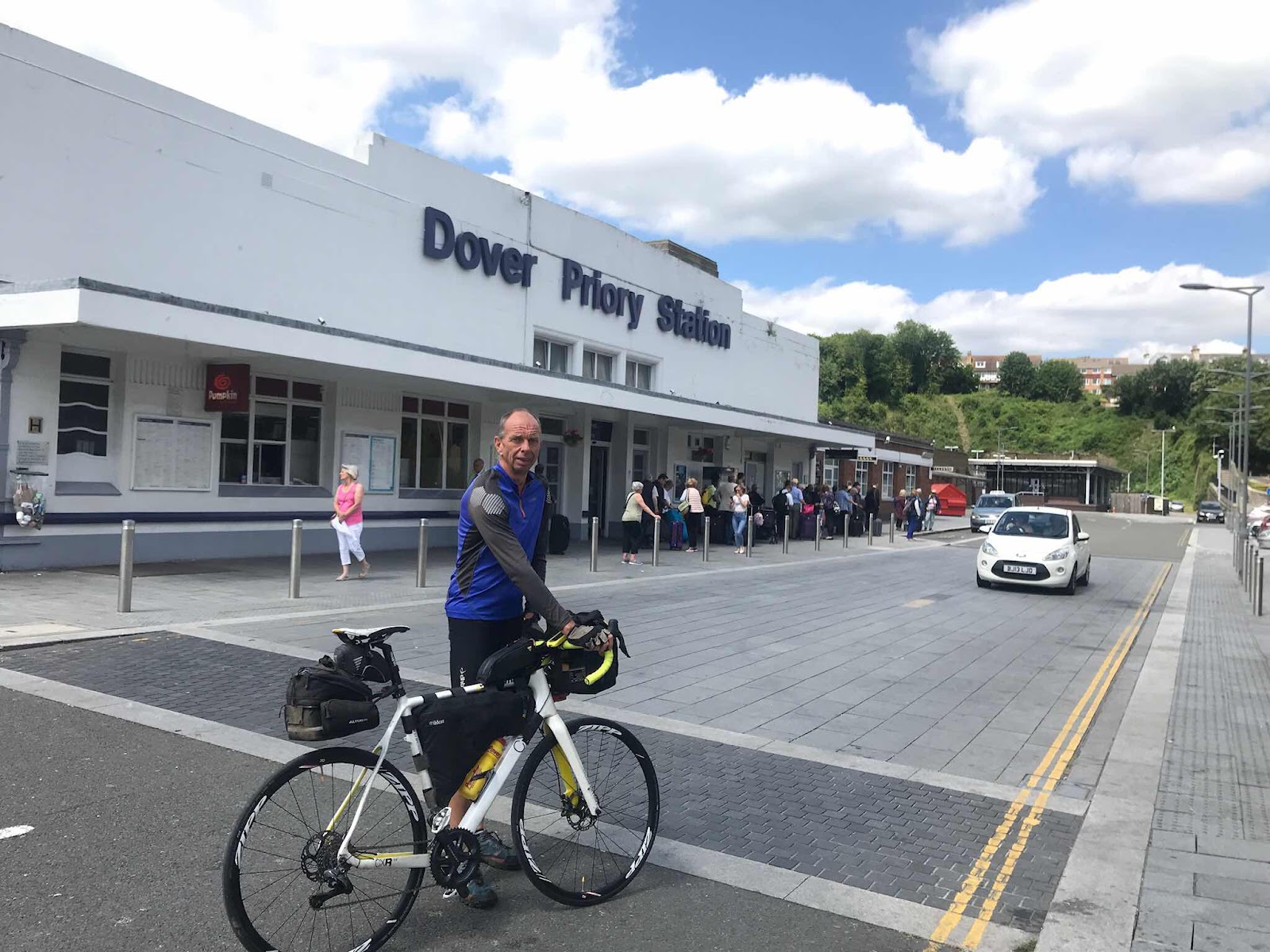 As Confucius said "every great journey starts with a cake" so on arrival in Dover the priority was to find some.  I had done the research and had found a cafe not far away, on top of the famous white cliffs, which is where we headed. I also know that there are 3 things Mrs Crusader hates on this type of cycle adventure.
1. Going up steep hills 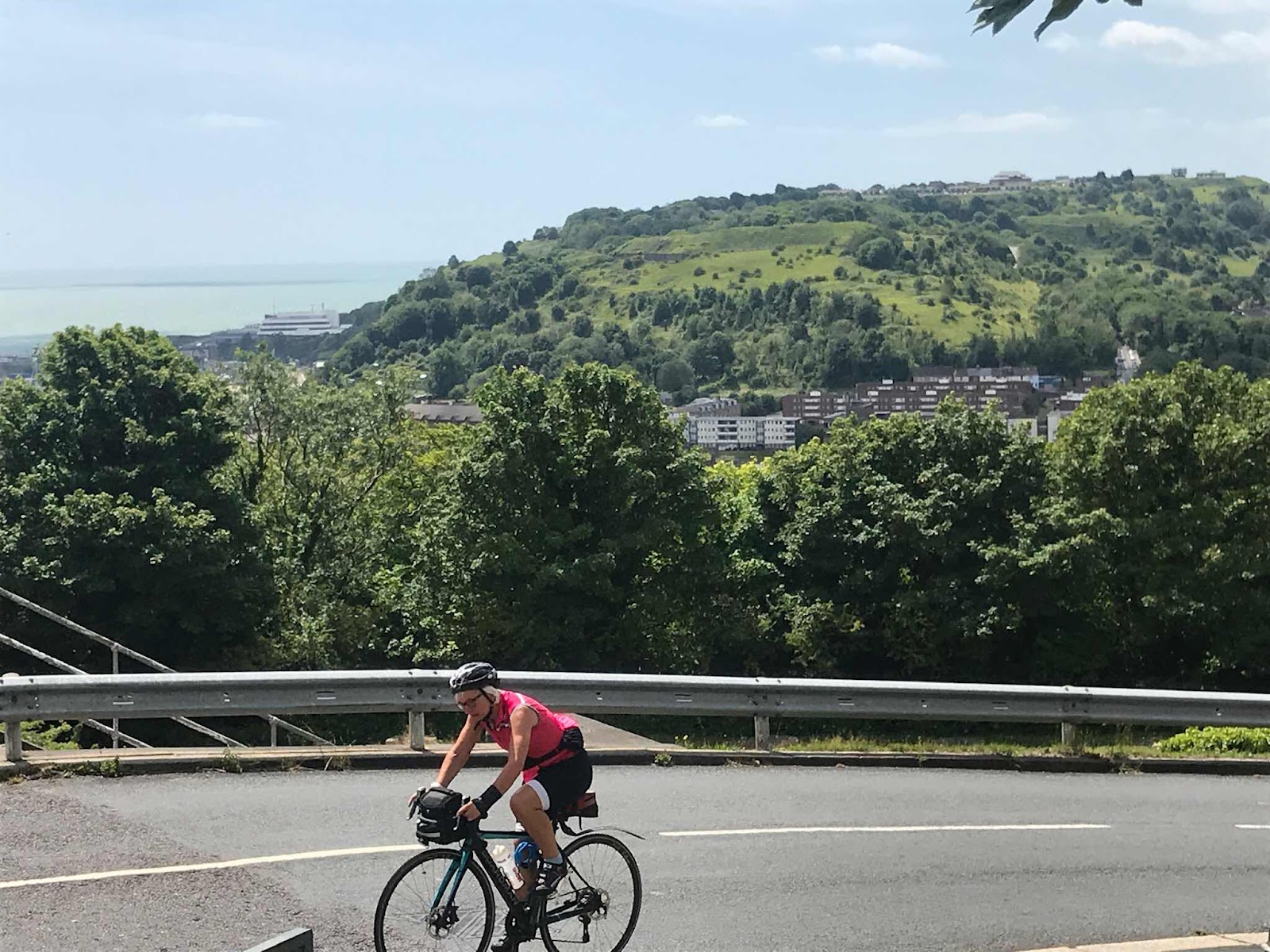 2. Going on bumpy off road 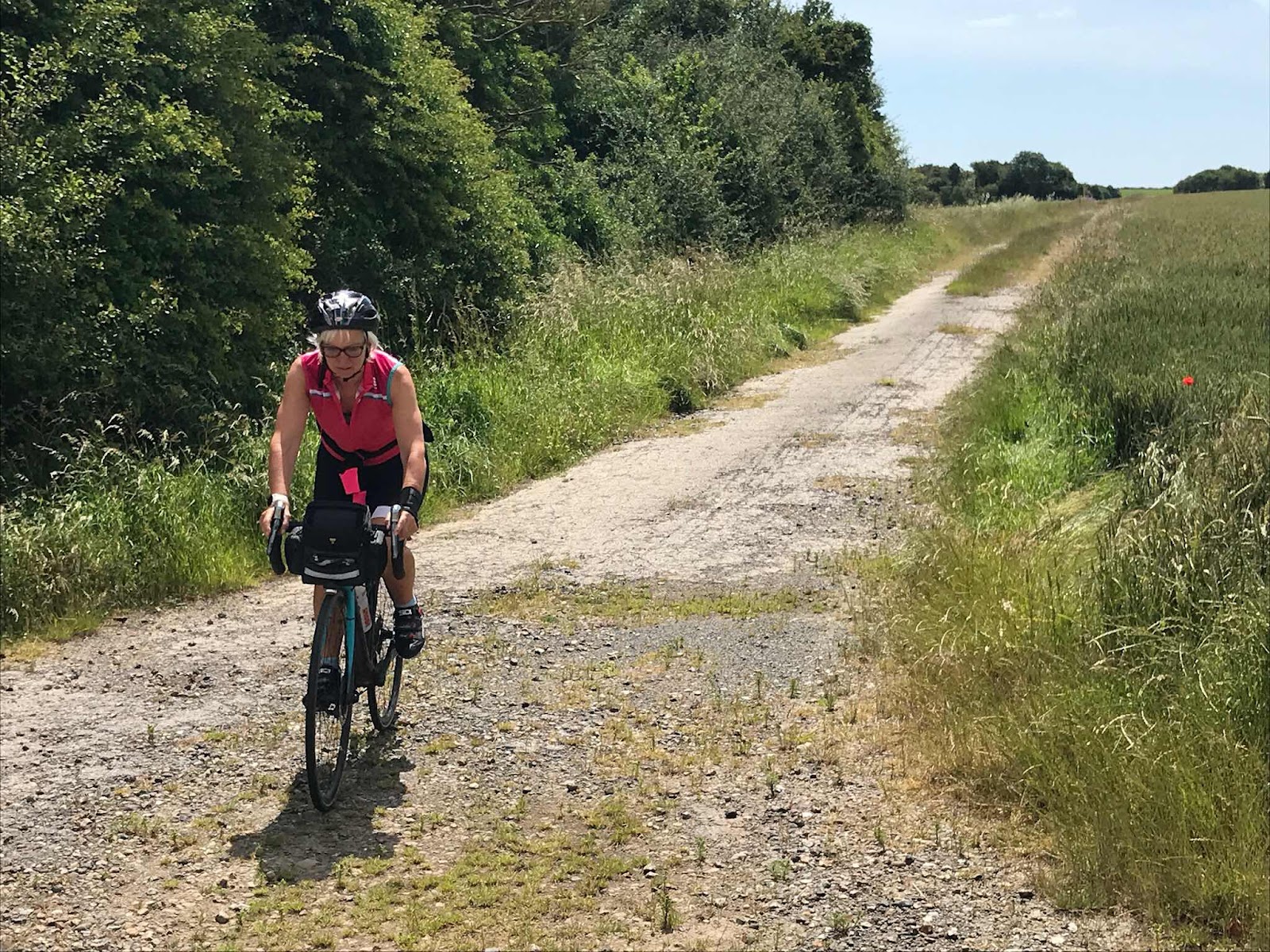 3. Getting lost and being persuaded to go through fields rather than retrace your steps 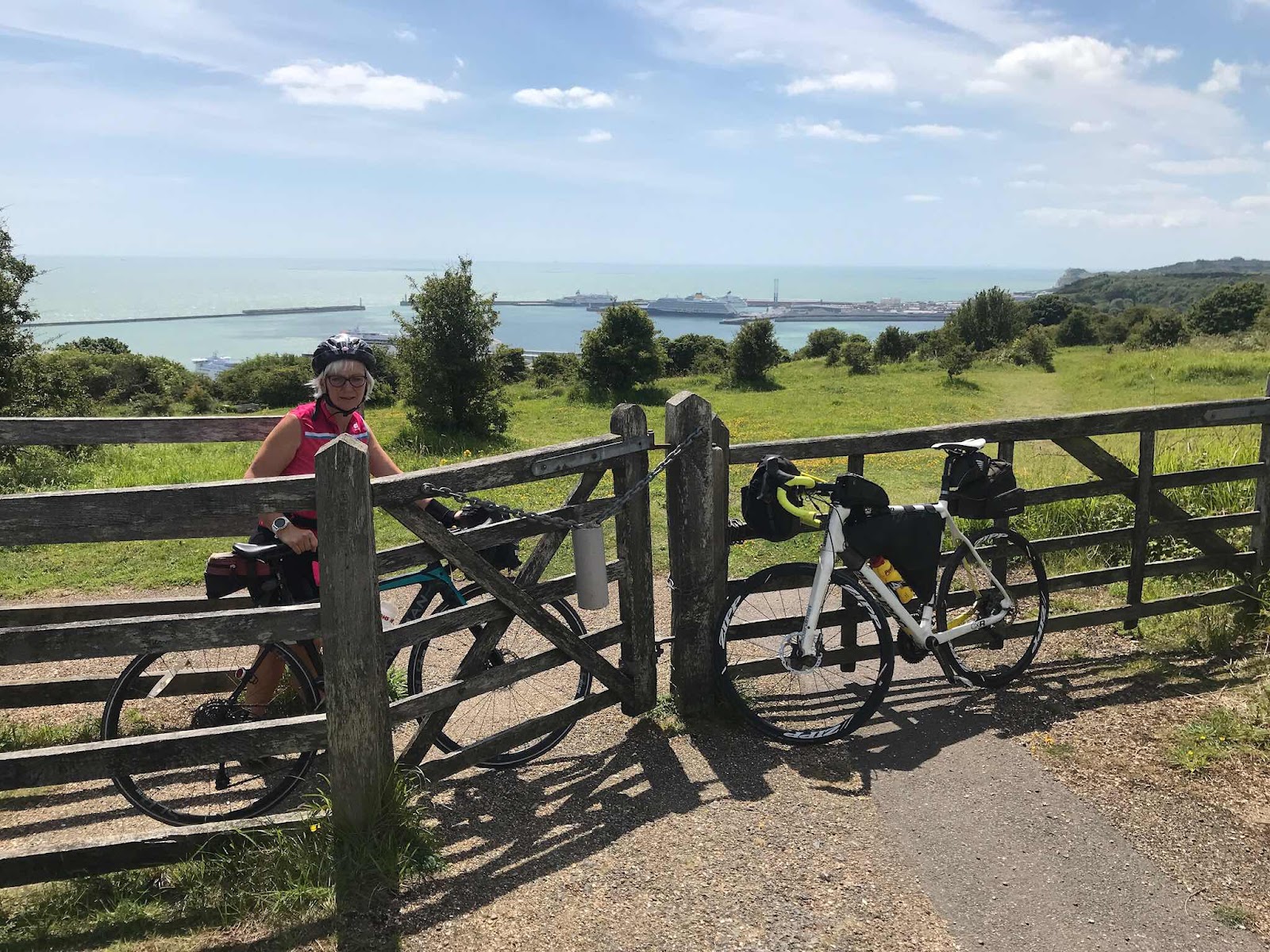 I felt I had exceeded expectations by delivering the holy trinity of cycling no no’s within the first 5 miles as we tried to find Mrs Knott's tea room on top of the cliffs. It was definitely a good sign that we were still speaking when we eventually got there and hopefully I have got these mistakes out of the way early doors this time.
Mrs Knotts tea room is mainly arrived at by walkers and it is inside a famous lighthouse. It is named after the lady who first tied two pieces of rope together, several times. Sadly the cake selection was limited and the Madeira style cake we had was fairly average however my hot chocolate was very good and the views from the outdoor seating area were stunning.
You could even see France today. 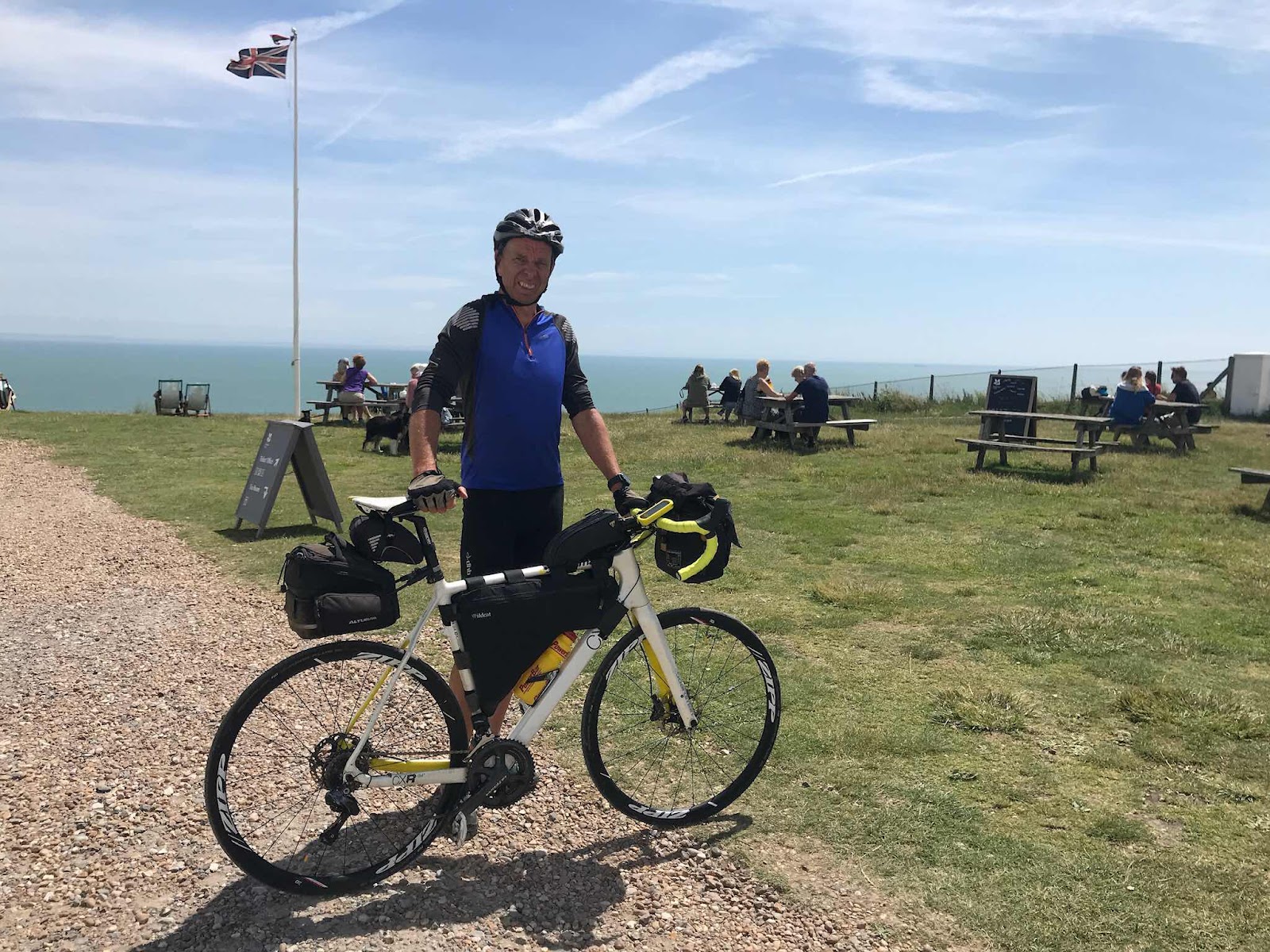 However we still had over 30 miles around the Kent coast to cover in order to get to today’s overnight stay. The first few miles were on some nice cycle tracks along by the side of shingle beaches and it was as flat as an award winning pancake so I was back in the good books. 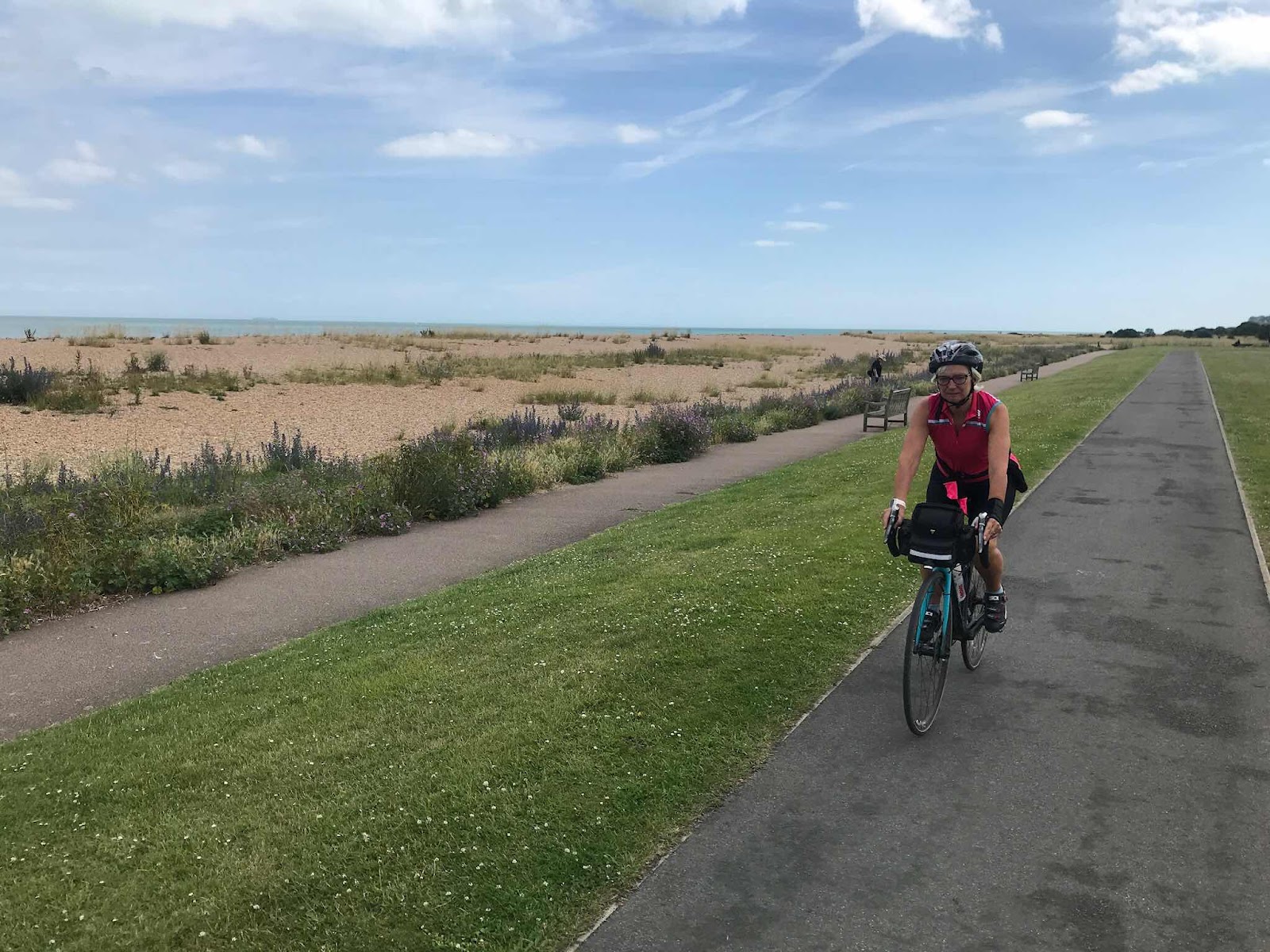 We then arrived at Deal who produced the first entry for pier of the day. I was hoping for a good contest but there seems to be a shortage of piers in Kent as it turned out to be the only entry, but well done to Deal Pier anyway. I will of course be sending the Mayor a certificate.
From here we headed slightly inland as the land between us and the sea was taken up by some top links golf courses including Royal St George’s a regular Open venue. Fortunately Mrs Crusader had not packed her clubs or we would have been stopping for a round.
At this point we split away from NCR1 for a bit as NCR 15 takes a much more interesting route along the coast. It is called the Viking trail and hugs the coast on some excellent tarmac tracks for most of the way. We didn’t see any Vikings but we did see where they had parked their boat while they went off for a quick pillage.
I know there are 3 things Mrs Crusader likes on a cycling adventure.
1. Cycling by the sea
2. Cycling on good tarmac off road cycle tracks 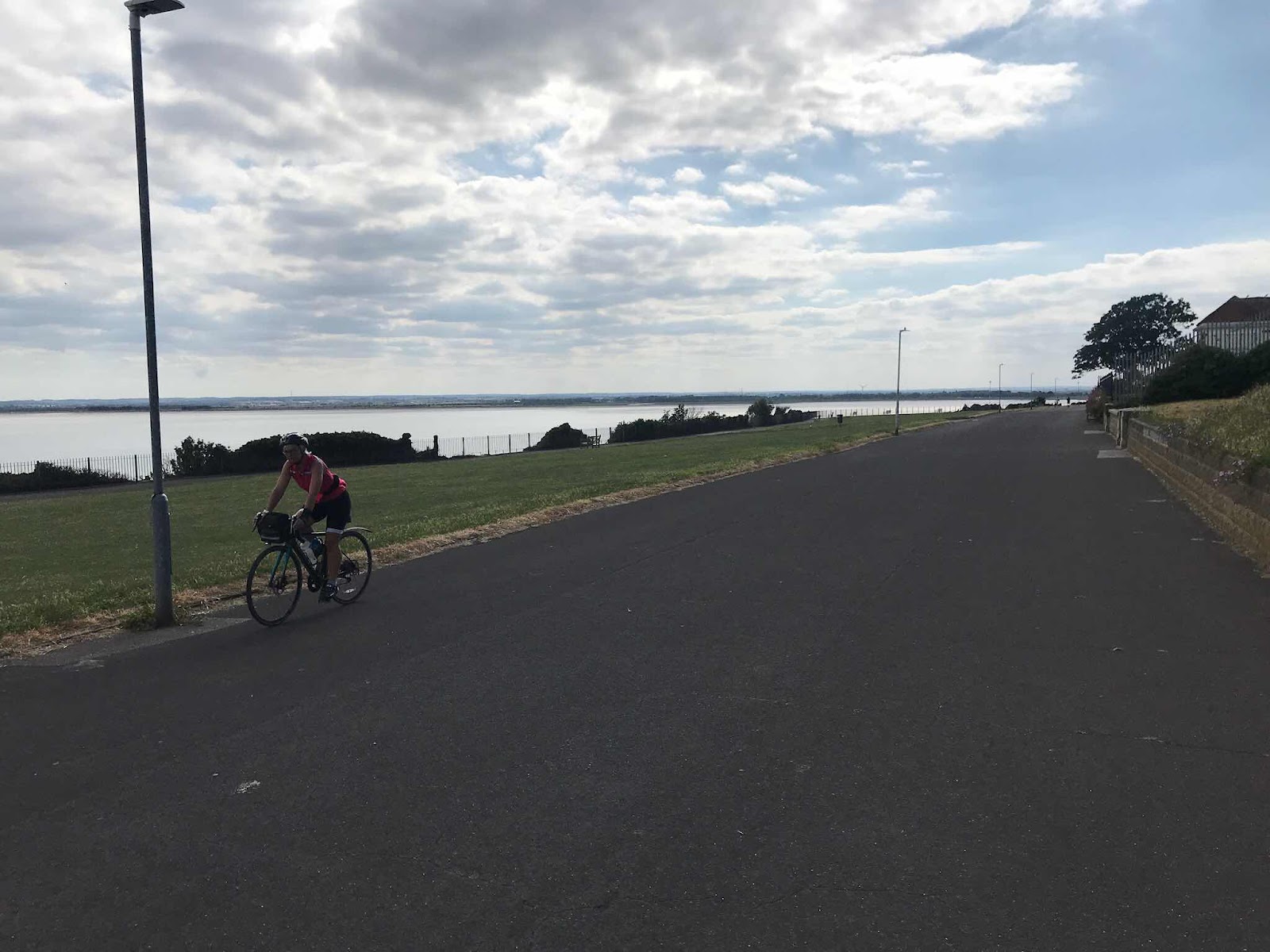 3. Looking at posh houses along the route
The Viking trail delivered these in spades meaning day 1 was off to a great start and the pre lunch dramas were soon forgotten. Things got even better when we passed 3 sea based lidos enabling me to start a new Lido of the day competition. The Mayor of Thanet can soon look forward to a certificate dropping through his letterbox.
This year I have abandoned the Premier inn overnight strategy as despite them being very bike friendly they are rather dull so we are going for a more high risk approach of random picks off booking.com. Today’s offering is the Hussar Hotel (which is actually a pub) in Margate (which is Kent’s answer to Great Yarmouth) and it seems functional if not characterful. We await to see how the breakfast performs.

Tomorrow we head West towards London where hopefully there will be plenty of pier and Lido action and some top cafes and cake to check out.

Stats
Posted by Cake Crusader at 21:00

Email ThisBlogThis!Share to TwitterShare to FacebookShare to Pinterest
Labels: Dover to Norwich Day 1