Dover to Norwich on NCR1. (Day 2 Margate to Rochester)

After yesterday's shorter cycling day then today we were down to business with a ride along the North Kent coast.

My non Premier Inn strategy had not so far paid off as there was no porridge available at breakfast this morning but after extra toast it was pedals down just after 9 as we returned to the seafront at Margate.
What followed was 22 miles of the best off road cycling that national cycle routes can offer as we rode almost continually by the side of the sea. 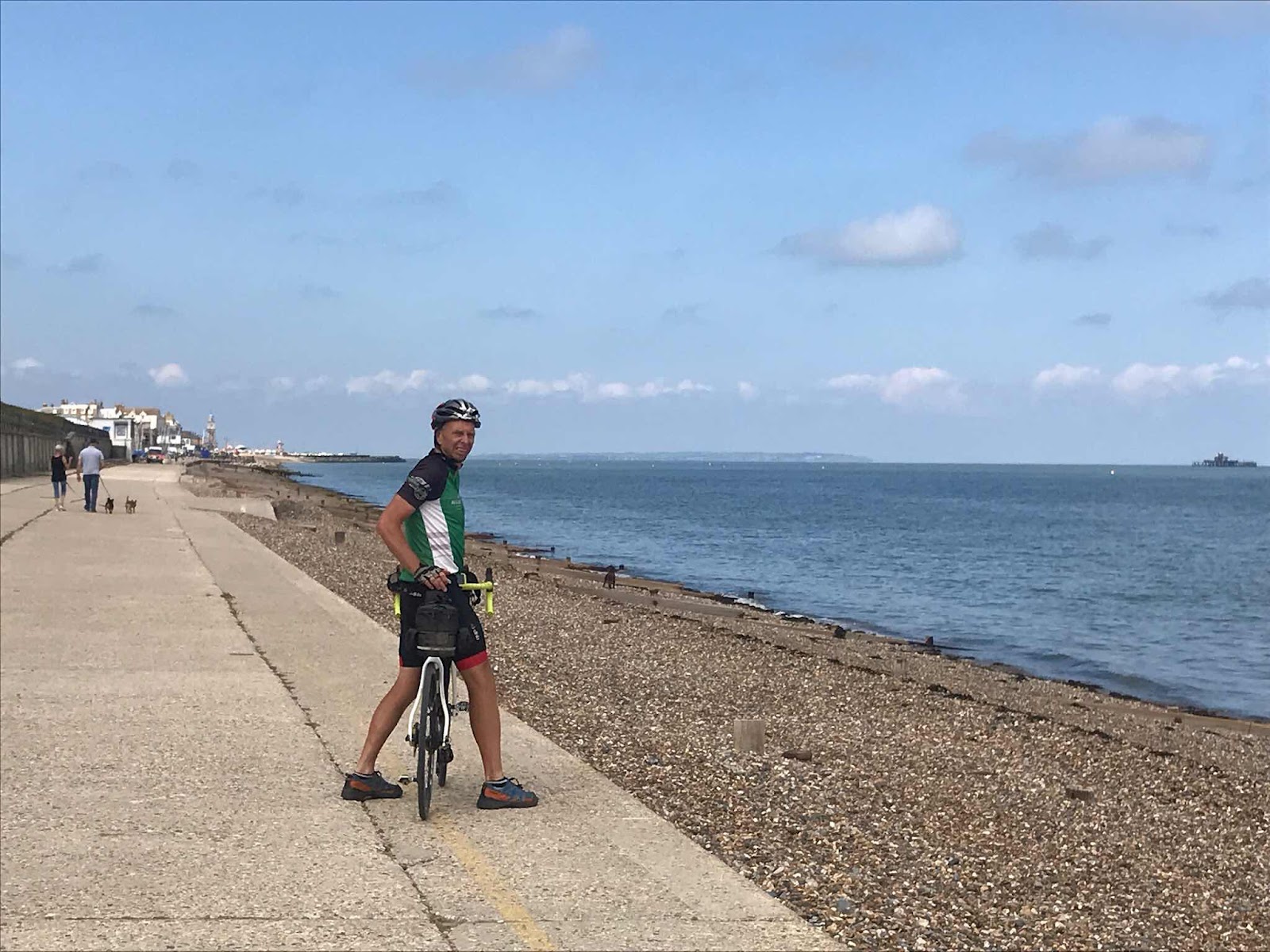 The only downside was that it was slow progress as the surface was a bit bumpy and you had to avoid the odd pedestrian whilst making sure you didn’t ride off the edge into the sea. But it was certainly worth the leisurely pace as we enjoyed lots of sea view action.
I was also looking forward to more lido and pier action but the only lido we found was in disrepair
Whilst the only pier was too short to qualify so no thing of the day certificates will be issued on this leg.
You may not realise it but Mrs Crusader is a Geography graduate so she was very excited to see some students on the beach being taught (or shouted) about longshore drift, whatever that is. She couldn't remember either but remembered the term.
However her skills don’t extend to knowing where anywhere is. As we arrived at Herne Bay she was convinced that this was in North Wales and that the distant Isle of Sheppey (below) was off the coast of Scotland. I asked where she though Canterbury was and was surprised when she correctly answered “Kent”, but spoiled it by then saying that despite being in it at the moment wasn’t really sure where Kent was. I was glad that I was in charge of route planning.
After skirting round Whitstable (in Devon) we returned to the coast and our first stop at Forget me Not tearoom. I had picked it as it was on the seafront so was rather disappointed that it was on the wrong side of the sea wall meaning the only view was of the next door caravan park.
The cakes were a bit dry and the hot chocolate was more of a not chocolate so I have already forgotten the forget me not tearoom.
It was now time to leave the coast and route 15 behind and return to NCR1. I have a bit of a love hate relationship with this route as the planner does like to mix the terrain up so you never know what to expect. And it certainly didn’t disappoint as after a nice series of quiet country lanes it inexplicably threw us off down a very bumpy off road trail by a sewage farm and river bank.
It was then along side a number of busy roads
Before finally sending us into a field where the signs soon disappeared as NCR1 seemed to pretend it wasn’t him and you had to navigate your own way back to somewhere more rideable.
After 20 miles of some of the worst cycling national cycle routes can offer we made it to Iwade (no idea where that is) and the Mews Brewhouse cafe. Despite it looking like a quaint village tea room on google it was in fact in a small shopping precinct on the edge of a new build estate.
The staff were very nice but cake selection sparse, drinks poor and marshmallow brownie didn’t really work so it was the third disappointing cafe choice in a row. Hopefully we will find a good one soon as we cycled past a lot of nice looking stops today but they all came too early in the ride.
For the final stretch the NCR1 surface lottery continued in the same way. We were now in the garden of England so there was much sign of brewery and orchards although we could have done without having to cycle through one.
The route got more and more built up as we weaved our way through a housing estate, which certainly didn’t offer the property porn opportunities that Mrs Crusader had enjoyed along the coastal stretch in the morning, and along side several roads.
There was time to return to the Medway estuary for a some good views although this didn’t last for long. You could tell it was one of the few nice bits in the area as there was a plethora of memorial benches all competing for the best views.
The final stretch was through Gillingham (in the North East) which involved going along the side of the dual carriageway and making use of more pedestrian crossing than the world champion stick shaker could ever wave his twig at.
We eventually got to the George Hotel near Rochester (Imaginary town in Thomas Hardy books) which looked like a Premier Inn clone as it was branded in purple but at least the menu is different and we have fine views of the Medway from our room.
So today was very much a game of two halves. Tomorrow we leave the coast behind for good so let’s hope the route performs better throughout the day and that there is porridge for breakfast. 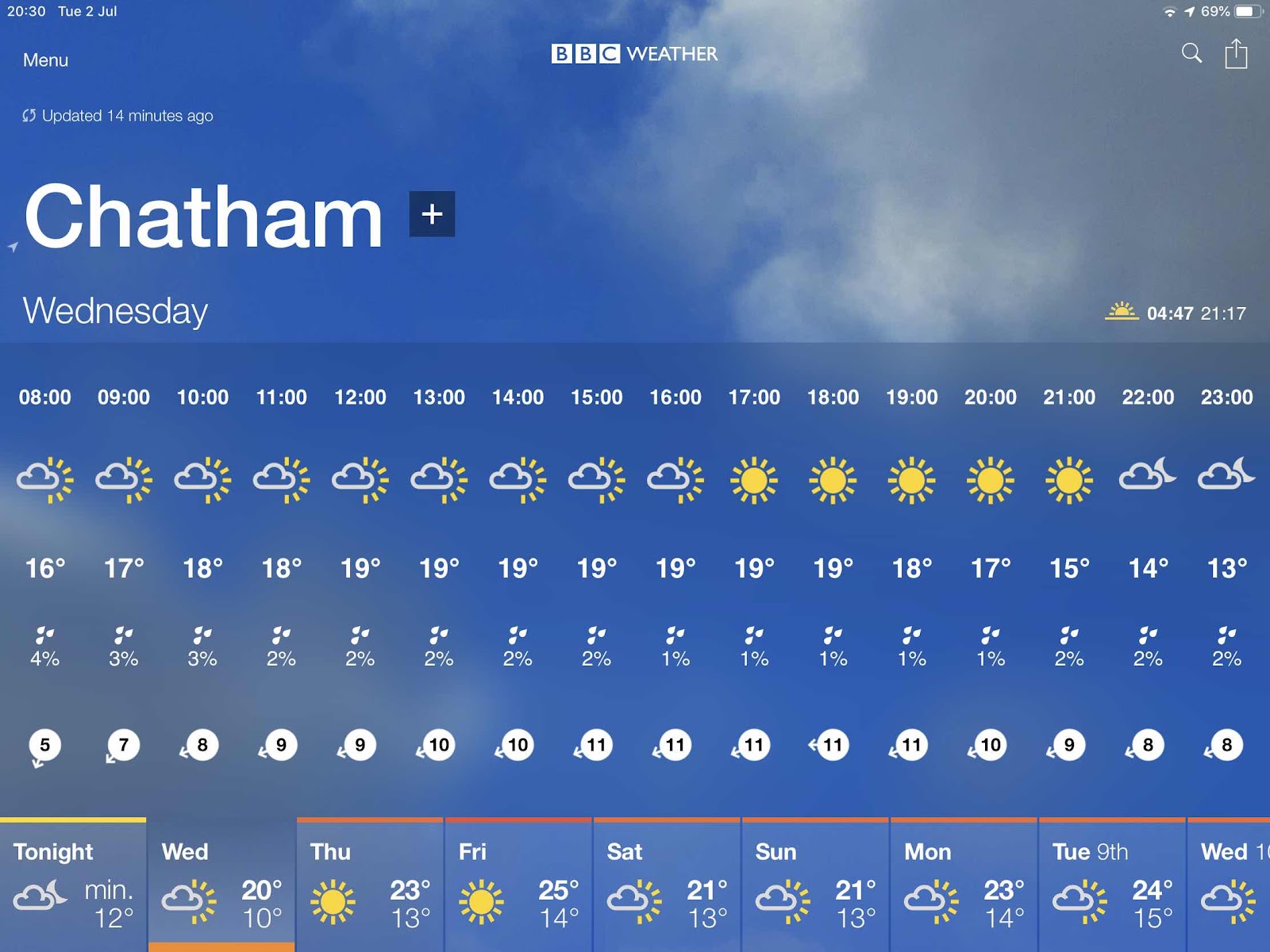 Stats
Posted by Cake Crusader at 21:00

Email ThisBlogThis!Share to TwitterShare to FacebookShare to Pinterest
Labels: Dover to Norwich Day 2