Along the Danube Day 1 (Vienna to Brataslava)

Along the Danube day 1
After the success of my recent trip along National Cycle route 1 from Dover to Norwich I thought it was time to see how some of the best cycle routes in Europe compare. Will their cycle routes end up in fields like back home, are the cafes along the route any good and can you get cake.

To test these things out I had chosen to cycle the route from Vienna (in Austria) to Budapest (in Hungary) along the Danube. I would be joined by Mrs Crusader but as a special treat I had allowed her to bring two cycling guests. Jenny (who on previous rides has broken a number of the very sensible Cake Crusader Cycle ride rules) and Cathy (who hasn't).

We would be hiring bikes and following a route provided by the tour operator who would also be transporting our luggage from hotel to hotel.

Map of total route over 6 days 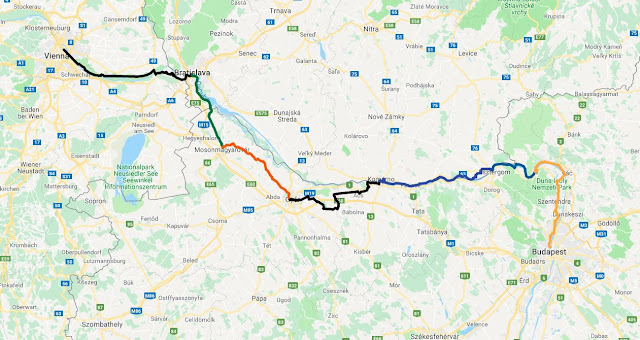 Yesterday we collected our hire bikes which were very solid but in excellent order. Despite it being a self guided trip we were then given a briefing that consisted of the nice lady rep teaching us how to turn the pages of our map book. As I live in the 21st century I had downloaded the routes to my gps so was now the proud owner of two navigational options. We would mainly be following Euro below route 6 so had these signs for added back up.
As it was only MEANT to be a 40 mile ride on a pancake flat road we opted for a leisurely 10 am pedals down start. Sadly due to much saddle height faffing we didn’t even make that. However we soon made up time as we rode along the side of the mighty Danube for several miles.
As we were in Austria it was time to play the Sound of Music game. The rules are simple each player must sing a section from a song and if the rest of the group recognise it from being in the musical you stay in else you are on your bike, literally. Cathy made a strong start with Do a deer, I followed up with ‘the hills are alive’ and Chris and Jenny stayed in with their offerings too but by the end of round 2 only Cathy was left as she won with a version of ‘my favourite things’  although she couldn’t remember any of them. We were all surprised that there were apparently only 7 songs in the Sound of music.
In the excitement of singing while lapping up the riverside views, we missed the turn and ended up at a dead end requiring a big detour through the local chemical works.
The cycle path surface  continued to be excellent and thanks to the flat route we made great time.

Even when we had to take a long division, due to cycle path improvement, we were on good quiet roads until we ended up at Orth for our first castle of the day.
Mrs Crusader was rather disappointed as she likes her castles to be more Norman in style and slightly ruined unlike these big chateaus. But would it be good enough to be crowned castle of the day.

Demonstrating my legendary flexibility I agreed to go off route back down to the river for our first lunch stop at Uferhaus restaurant.
It scored well as the atmosphere and ambiance was excellent as we enjoyed views of the river behind us. The coffees and hot chocolate were good ones and there was even a proper cake selection with the yogurt cake I had being very tasty. Uferhaus has set a high standard which may be hard to beat
By now the sunny day had become more unsettled and as it started to cloud over we arrived at our second castle of the day. It was much smaller than the first one but in better grounds that you could cycle through. It was hard to decide on the best so far. Everyone in the group is allowed a vote although they only count if they agree with mine, which seems fair.
Soon after we were hit by a brief and unexpected Thunderstorm but thanks to some excellent sheltering we remained mostly dry.
As we headed off again we returned back to the river which we needed to cross as we entered the town of Hainburg.


Jenny insisted on visiting what was a standard European medieval town with church, square etc (yawn, yawn).
But at least I got to rate another café which again had cake (well done Austria as it seems to be the only other European country keen on cake). It was a nice stop and cake, but nothing exceptional so our first stop is the early contender for best café on the Danube.
Hainburg also had a castle but it was high on a hill and a bit run down so unlikely to win todays title..
From here it was a final  push to Bratislava as we crossed the border into Slovakia. It gave an opportunity to add to my occasional series of black and white photographs of deserted border crossings.
As we approached our 50th mile of flat riding on probably our longest day then Bratislava castle came into view and comfortably won castle of the day.
Austria had certainly delivered on day 1 and has thrown down the gauntlet.

Apparently Bratislava can been seen in about 2 hours so we plan to check it out tomorrow before we set off on a much shorter stage to see what Slovakia has to offer.