By the seaside on NCR2 day 6
Deblyns Tea Shop,
New Romney
Comemos Deli,
Folkestone
It was the final day of our cafe cycle ride across the South Coast and it came with a deadline, as we had to catch the 4:20 from Dover to London if we were to make it home to Norwich tonight. For this reason Mrs Crusader insisted on an early alarm and we were breakfasted and packed with pedals down by 7:45am.
After yesterday’s long haul up through Hastings we took a more direct route back to cycle route 2 which was waiting for us near the coast. It was good to see the sea again even if we did have to climb up to the top of the sea defences to take a peak.
There then followed the best sections of county lanes and off-road paths that we have had all week so despite being into a strong wind progress was good.
It was a long stretch before our first cafe break but we had another visit to the coast and this time were allowed to ride on the sea defences and enjoy the seaside ambiance.
Next things got very bleak and we saw virtually no one as the landscape looked like something post apocalyptic. I expected to come face to face with a zombie at any moment although I didn’t as I think they only come out in a full moon (or is that werewolves).
We then took a short detour to our refreshment destination in New Romney. This was a very twee tea shop and not the sort you would expect to find Zombies in, and we fortunately didn't.
It only had a 2 cake or scone selection but the cakes looked good. I went for the cherry and cream chocolate sponge and Mrs Crusader the coffee cake.
The cakes and drinks scored well and the pleasant outdoor seating area made Deblyns another excellent find.
The next section was a game of two halves. The first was across Romney Marshes and into a strong wind. It went along some pleasant little lanes and tracks with the one running alongside a canal being particularly good.
The second half went along the prom at Hythe, which was deserted. Mrs Crusader awarded it first place in the best prom of the week to cycle on category.
At Hythe we had our final cafe stop at The Comemos Deli. Sadly a large building and badly parked car obscured any possible views of the sea.
The cake selection was very interesting as Mrs Crusader opted for chocolate orange cake (with real chocolate orange) while I went for crunchy cake (with real crunchy).
Again the cafe performed well on all fronts but not quite good enough to make the podium. As an aside the lunch we had here was the best all week however my number one seaside cafe on NCR2 is the Hideaway at Seaton which was the very first cafe we went to making the next five and a half days a bit of a waste of time really.
There were just 10 more miles to go but once through Folkestone the route went sharply up on to the cliff tops slowing progress but offering stunning views of the town below.
Then round the next corner the famous white cliffs appeared and we knew our journey was nearly at an end.
With a final few ups and downs we had made it to Dover station and thanks to Mrs Crusader, making us set off extra early this morning, we still had enough time for a quick day trip to France before our train was due to depart.
Our Six day, 300 mile, 12 cafe cycle ride across the South Coast was over. But what had I learnt.
1. Cafes by the sea always rate higher than the equivalent inland
2. Mrs Crusader still doesn’t like hills or being jiggered on her bike
3. Based on a survey of 3 then pensioners in Sussex don’t like cyclists.
4. Mrs Crusader can now name, in order from West to East, all the counties across the south coast except the one beginning with H which she always forgets.
5. The perfect cycle ride is about 50 miles, on flat tarmac, in sight of the sea and on a crisp winters day. I’m still working on delivering it.
6. Not only does cycle route 2 end at Dover but cycle route 1 starts there, which has given me an idea......... 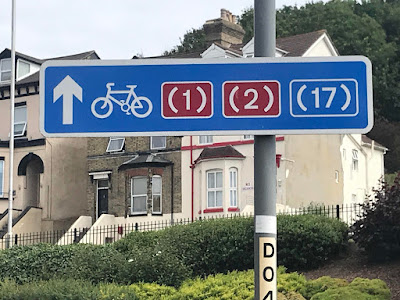