By the seaside on NCR2 day 1
The Hideaway Cafe
Seaton
Symondsbury Kitchen
Symondsbury
Having recently returned from my cycling trip; "Across the Pyrenees in search of the Ultimate Croissant" (see Cycling across the Pyrenees day 1), I felt it was time to try something more traditionally English. Having cycled most of National cycle route (NCR) 1, Norwich to St Andrews, and NCR4, round South Wales, with Mrs Crusader over the last couple of years then this year I thought I would invite her to join me on NCR2 which goes along the South coast for some traditional seaside action.
On our previous trips I have not been a great judge of how far and how high our rides should be with last years trip to Wales ending in disaster. As we reached the top of another large hill (when I see 'we' I had actually been waiting at the summit for sometime) she questioned what part of this ride did I think she would enjoy. My misunderstood answer of 'but I thought you were a better cyclist than this' did not seem to help the situation and the trip was abandoned a day early with the use of a train. (See My special rides page for full details).

This year's stage lengths have been cut to under 60 miles a day with a promise of only today's stage being a bumpy one.
Yesterday we had caught the train from Norwich to Exeter and then enjoyed a leisurely 12 mile ride along the river Ex to our hotel, where I revealed the weeks itinerary in detail, while Mrs Crusader glazed over.
This morning we breakfasted early and it was pedals down at 9 o'clock as we set off on our seaside adventure.
I had warned Mrs Crusader at last nights briefing that today would be quite hilly but the following days would be much flatter and hoped she had improved as a cyclist up to the level of these climbs (she hadn’t, quite).

From leaving Exmouth we had to go over a ridge down to Budleigh Salterton and then there were two steep climbs, up and down out of Sidmouth. Sadly these were a bit much for Mrs Crusader who had to walk up parts of them but as it was early in the day she was still in good spirits, for now.
Sidmouth looked very seasidey and I had been recommended to stop at the clock tower cafe but it was still a bit early for our first cafe stop so we pressed on to Seaton.
It was here where things started to unwind as we had to go down a particularly steep hill to get to the target cafe. The one thing Mrs Crusader likes less than cycling up hill is a very steep downhill and things only got worse when I guided us on to a shingle beach some way away from Seaton seafront.
Much against my natural instincts we had to turn round and eventually found another route down to the Hideaway cafe.
It had a fantastic location right by the sea so scored very highly in the AAA category.
The cake selection was excellent too. I went raspberry brownie and Mrs Crusader went blackberry and almond slice with her Americano.
Refreshments were pretty good if not spectacular with the brownie being my favourite although too rich and big to finish. However the Hideaway cafe had started the week well by putting a high score on the board that may be difficult to beat.

We set off again and tackled the third big hill of the day. As it was slightly less steep Mrs Crusader proudly rode to the top without getting off however she had gone very quiet, I wasn’t sure if she was knackered or cross so I decided to cycle a little way ahead and give occasional encouraging shouts rather than find out.
After another 25 miles, with several more short sharp ups and downs, I could tell she was fading so needed the energy giving powers of cake for the final push to our overnight accommodation. We therefore stopped at the nearby Symondsbury Kitchen cafe on the Symondsbury estate. As it was late in the day it was nice and quiet. The barista was suitably impressed as to where we had cycled from and fortunately agreed the hilliest part of the week was behind us.
As I hope you know I always like to have a hot chocolate with my cake but I’m not a fan of Cadbury’s which I find makes a sweet sugary milk drink and at best gets a five out of ten. As I would be drinking a lot of hot chocolate on this trip I had decided that if I spot the catering sized tin of Cadbury’s drinking chocolate behind the counter then I will award a five out of ten and have a nice cup of tea instead. Which is exactly what I did here.
Our cakes were excellent as was Mrs Crusaders coffee so more high marks and another highly recommended stop.

Now refuelled by the power of cake we were able to complete the last 10 miles to our overnight stop at the Crown pub in Puncknowle (pronounced Punnel).
That wasn’t the end of the excitement as first we had the ride debrief where I had to admit we had actually climbed more metres than all but one of the days in Wales. Then we had tomorrow’s briefing, with maps and profile,  of the 51 mile route to Bournemouth. I demonstrated that after the big climb first thing tomorrow morning then it should be downhill or flat (or apparently I’m toast). But just as you thought it couldn’t get any better, news arrived that the local Morris Men were about to perform in the pub car park.
It was a slight anticlimax when the Morris Men turned out to be only 4 Morris Women with hankies, as some of the others were stuck in traffic. After their first dance chaos ensued when a 5th Morris man turned up with sticks and a beard. Apparently they didn’t know any dances for 5 so one of the others had to be subbed off. Once the new formation had been sorted a stick based dance was expertly performed.
After all the hills and morristastic dance action we were ready for bed in order to prepare for tomorrow’s ‘flatter’ adventure. 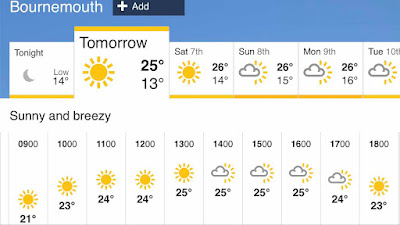 * we also did 19 miles getting to Exmouth
Posted by Cake Crusader at 11:21