By the seaside on NCR2 day 3
Rosie Leas Tea Room
Broklehurst
The Beach Hut Cafe
Hamble Ferry
Things have not yet gone to plan over the first 2 days of our homage to the seaside as the hills were too steep on day 1 and we found ourselves in the middle of a bog on day 2. The last thing needed today was some self inflicted jeopardy which I added in when I announced I was keen to make it to Portsmouth in time for England’s World Cup quarter final at 3.00pm.

All that stood between us were 53 miles, an off-road ride across the New Forest and three ferry’s, what could possibly go wrong. The kind landlady at our B and B had agreed to bring breakfast forward 45 mins to 7:15 in order that we could have pedals down by 8:00 and so we found ourselves on the road early.
It wasn’t long before we entered England’s newest national park, The New Forest. They even have their own special speed signs.
It transpired that if a speed sign has New Forest on it then this means car drivers can ignore the speed limit and go as fast as they like, which most of the cars obientently did as they zoomed past, but apart from this things were going well.
Then out of the blue the route turned into a field and the pace dropped.
This eventually became a gravelly old railway track and we were shaken for several miles. Mrs Crusader was not happy as she hates being jiggered on her bike nearly as much as cycling up hill.
We were both pleased to be able to complete this section and regroup at our first cafe stop. Looking at the time we had lost and knowing there was an even longer off road stretch to come, then World Cup action looked unlikely. The cafe was called Rosie Leas which is now the second one I have been to with that name, but quite different in style from Norfolk’s offering.
As it was such a nice day there was only room inside where we found a table plus a decent cake selection. I went coffee and walnut and Mrs Crusader chocolate cake. As usual I had hot chocolate and she had americano. They were all nice but not the best this week although still another high quality stop.
It was now I performed my master stroke as I got out the map and encouraged Mrs Crusader to look at it. She came up with a new route which avoided another long off-road stretch. I pretended to be disappointed and reluctantly agreed but really this is what I wanted as it would give a chance to make up the lost time and get back on track for kick off. (Tee-Hee).

As we left some local ponies were having a chat on the street corner, probably as to which pub they were going to watch the game in.
The road was a fast one with the traffic getting heavier the further we went along it and as it had the special New Forest speed signs the cars whizzed past.  But in the end we made it speedily and safely to the first of three ferry trips today.
However before we boarded the ferry I couldn’t believe my luck as I spotted another troupe of Morris dancers, the second of the week. This immediately gave me a chance to set up a Morris dancing spreadsheet. I awarded these ones 7.4 and was particularly impressed with their hankie work, especially as they were coloured ones.
After a long walk down the jetty we clambered on board to cross the Solent. I checked my watch and kick off time was approaching fast, I knew everything would now have to go our way if we were going to make it in time.
Once out of Southampton then the next part of the ride was a nice easy section along side of the Solent estuary until we arrived at our next ferry crossing and 2nd cafe stop.
The Beach Hut cafe had inspiring views of the river and as a result was heaving on such a lovely day.
I kindly said I would queue to order (although this was really to make sure I got us quick to prepare lunch items). I got us both a cheese scone and for once asked for them cold to speed things up. I also had some coffee and walnut cake.
The cake was some of the best all week (even if it had been served on its serviette) and the Beach Hut cafe moved into second place in the rankings. I did have a good look but despite its name couldn’t see a beach anywhere.
We were still on the clock and I noticed the ferry was in port so made Mrs Crusader stuff in the rest of her scone as we raced off to the jetty. But we were too late as it pulled out of port before we could make it. This was a major setback but then, as if by magic, out of nowhere a second ferry appeared and we were back in the game.
Once disembarked on the other size we still had 15 miles and a ferry crossing to go and there were just 90 mins before kick off. The next section was also down the estuary on a series of on and off road cycle tracks making progress mixed. To add to our woes I fell off my bike after taking a wrong turn but foolishly got up before Mrs Crusader had a chance to take the photo for the blog. I was very cross with myself.
I decided it was time for one last push so abandoned the official cycle route and headed the direct way to Gosport ferry terminal. Once again our luck was in as the ferry was ready to go.
We landed in Portsmouth and dashed down the gangway before a last charge to the hotel. We got to the check in desk just as the game was kicking off on a big TV in the bar. It was strange that when I needed everything to go to plan it did but when Mrs Crusader wants a smooth days cycling then bizarre incidents always get in the way. It’s almost as if I make them happen on purpose just to give me something to write about. Tomorrow is our longest ride and my mission is to find us a cream tea. I have a target tea room in mind but we need no slip ups as it comes towards the end of the day, I wonder what will happen? 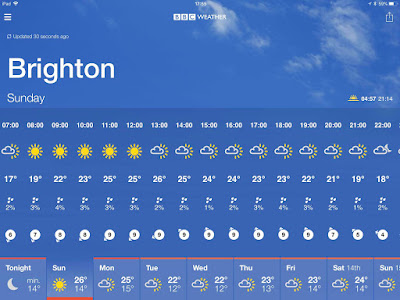 
*note 19 miles were done getting to Exmouth
Posted by Cake Crusader at 18:17