By the seaside on NCR2 day 4
Spade and Fork
Chichester
Sea Lane cafe
Worthing
We were now halfway through the ride and my main goal; of proving to Mrs Crusader that I could deliver a good cycling experience was not going well. Hills, bogs and bumpy off-road tracks had all distracted from her favourite seaside cycling setting. Our dash across Portsmouth for the start of England's World Cup match yesterday afternoon had not helped my case either. Today I was confident I had it sorted. The ride had the flattest profile ever, there would be many sightings of the sea and I had promised her a cream tea finale.

As always there was a challenge as it was the longest ride of the week (nearly 60 miles) and we needed to get to the cream tea before closing time. Our first obstacle was Hayling Island ferry which only ran about once an hour. I was keen we got there for the first crossing at 9am so another relatively early wake up to make sure pedals were down by 8.15am for the 5 mile ride to the port.
The first target was made with 10 minutes to spare as we boarded the ship. I was particularly impressed with the on board cycle rack which was nearly full today.
Partly because of the cycle rack facility but mainly because it was the only ferry we were going on, it won today’s ferry of the day prize.
I had never been to Hayling Island before but Mrs Crusader had coincidently come on a family holiday last time there was a heatwave back in 1976, and boy was it hot again today. Worse still we soon found ourselves on one of those disliked off-road tracks fortunately it wasn’t too bumpy and the views were good so I think I got away with it.
From here the next section was the first one I had been disappointed with from a scenery perspective. It delivered on flatness but went alongside busy roads and through towns albeit on cycle paths. The only interesting section was when I got lost and we ended up cycling along a river looking for a bridge.
So it was with some relief when we finally made it to the first cafe stop. As it was a Sunday there were less options open to us so I had gone for a safe bet of the Spade and Fork cafe at the local garden centre.
Despite it being gone 11:30 all the other punters were having full English breakfast. I was not impressed as I believe breakfast should be done and dusted by 9:00 and I had completed mine over 4 hrs ago. To make matters worse the lady sitting behind, with her back to me, started a full on rant to her husband about evil cyclists with the standard cliches of jumping lights, riding on pavements, don’t pay road tax etc. When we had early walked past in our Lycra we had probably triggered some subconscious anti cycling response as she clearly had forgotten we were there and didn’t pick up on the hints as her husband kept trying to change the subject. On the positive side my carrot cake was good, although Mrs Crusader found her lemon drizzle a bit dry, with our drinks being better than average.
Away from breakfasts and rants we were soon back on the road again. Sadly it was more of the same as we found ourselves on more busy road cycle paths.
Eventually we hit the sea again at Littlehampton and got to see our second pier of the day, which was enough to start a brand new pier based rating spreadsheet. This one was mainly pier with little entertainment on it, which is not a judgement just fact.
Soon after, we arrived at the Sea Lane cafe for a late lunch. I had especially chosen it as it was on the seafront which is how Mrs Crusader likes her stops.
There were nice views of the sea and the beach was quite quiet, probably because everyone was in the queue to get served at the cafe. A queue I found myself at the back off and it wasn’t for another half an hour until I made it to the front.
There had been an exceptional cake selection from which I had chosen banana sponge and a raspberry sponge for Mrs Crusader who was by now getting sunstroke guarding our beach side table.
My hot chocolate was a bit weak although the coffee scored well. The cakes looked better than they tasted being a bit too dense in texture. However all in all it was still of the highly recommended standard and goes into second place on my south coast seaside cafe competition. The trouble now was that the long wait to order followed by another long wait for lunch to turn up had meant that the chances of finding a cream tea had vastly diminished. Things were not helped by the energy sapping heat or the next section which went along the prom in Worthing. Dodging pedestrians on the shared pathway made for slow progress although there was another pier waiting for us at the end.
The final section was a slow combination of shared proms and cycleways though the Brighton area.
As we melted away in the sun it took one last push to our final pier at Brighton where we found our hotel and both had a cold shower.
During the end of our ride I had noticed the majority of tearooms were closing so was not optimistic about cream tea prospects but as Mrs Crusader showered a quick search on google revealed a late closing tea room nearby. We made a quick dash and got there just in time for last orders.
Over tea I asked if I had finally delivered a good cycling experience. It had been flat, we had only got a bit lost once, there had been hardly any bumpy bits and we had seen plenty of the sea. I was then informed she only likes the seaside in the winter when it is empty and dramatic. In the summer it’s too hot and crowded. Although slightly deflated I feel I’m getting closer and with cooler weather forecast for tomorrow and it being a Monday (who goes the sea side on a Monday) I still feel I have a chance. 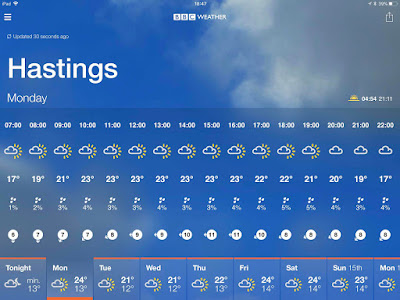 Stats
Posted by Cake Crusader at 18:41